After the chaos and humiliation, May has a relatively good day 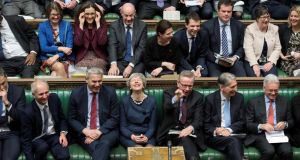 After the chaos and humiliation of a double defeat in the House of Commons on Wednesday, Theresa May had a relatively good day on Thursday.

She won a huge majority for her motion to delay Brexit and fought off a move by MPs to take control of the parliamentary agenda.

It’s true that most of her own MPs and eight of her cabinet ministers voted against the government’s motion but it was a free vote so it represented no direct defiance of her authority.

The narrow defeat of Hilary Benn’s amendment to give MPs control of the Brexit agenda was a major boost for the prime minister as she seeks to rescue her withdrawal deal by next Wednesday.

Senior DUP figures and government ministers negotiated throughout Thursday and the talks will continue on Friday and perhaps through the weekend.

The DUP’s support is essential for the Brexit deal to have any chance of winning a majority in the Commons, although party sources are sceptical that their decision would sway enough Conservative Brexiteers to secure victory for the prime minister.

The talks are understood to be focused on three strands: legal assurances that the backstop cannot endure indefinitely; guarantees that there will be no dynamic divergence of regulations between Northern Ireland and the rest of the UK without Stormont’s approval; and funding for projects and less well-off areas in the North.

The legal assurances depend on attorney general Geoffrey Cox changing or clarifying his legal advice, perhaps by reference to the Vienna Convention on the Law of Treaties or precedents in international law.

The DUP has long demanded that the Brexit deal should better reflect paragraph 50 of the December 2017 joint report that launched the idea of the backstop.

It says that Britain will ensure that no new regulatory barriers develop between Northern Ireland and the rest of the UK “unless, consistent with the 1998 Agreement, the Northern Ireland Executive and Assembly agree that distinct arrangements are appropriate for Northern Ireland”.

And it guarantees “the same unfettered access” for Northern Ireland’s businesses to the whole of the UK market.

Extra funding for Northern Ireland could be modelled on the £1.6billion (€1.8 billion) Stronger Towns fund launched this month to boost less well-off towns in England after Brexit.

The DUP’s confidence-and-supply agreement with the Conservatives, which included more than £1 billion in extra funding, expires in June.