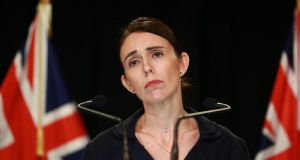 New Zealand’s cabinet will meet on Monday morning to begin work to change gun laws, as the county continued to grapple with Friday’s attacks in Christchurch, which left at least 50 people dead.

Prime minster Jacinda Ardern said on Sunday gun regulation would be discussed, telling reporters: “We cannot be deterred from the work we need to do on our gun laws in New Zealand. They need to change.”

Civilians in New Zealand own an estimated 1.2 million firearms, making the country’s per capita rate of gun ownership higher than Australia’s, but still far below the US.

It is alleged that the suspect in the attack, Brenton Tarrant, a 28-year-old Australian fitness instructor, had a firearms licence and five guns.

As tributes were paid to the victims, 34 people remained in hospital on Sunday, including a four-year-old girl who is in a critical condition.

She said if the document had provided details that could have been acted upon immediately, they would have been. “Unfortunately, there were no such details in that email,” she said

She also said there were “questions to be answered” about the role social media played in disseminating video footage of the attack and confirmed she had been contacted by Facebook’s chief operating officer, Sheryl Sandberg, in the wake of the shootings.

New Zealand’s police commissioner Mike Bush said Mr Tarrant, from Grafton in New South Wales, remains the only person charged in relation to the attacks and he would likely face more charges.

A steady stream of mourners paid tribute on Sunday at a makeshift memorial in Christchurch to the 50 victims.

Two days after the attack, relatives were still waiting for authorities to release the bodies. Islamic law calls for bodies to be cleansed and buried as soon as possible after death, usually within 24 hours.

Ms Ardern said authorities hoped to release all the bodies by Wednesday, and Mr Bush said authorities were working with pathologists and coroners to complete the task as soon as they could. “We have to be absolutely clear on the cause of death and confirm their identity before that can happen,” Mr Bush added. “But we are also aware of the cultural and religious needs. So we are doing that as quickly and as sensitively as possible.”

Meanwhile, members of Brenton Tarrant’s family expressed their sorrow for what they called “unrepairable” actions.

His grandmother, Marie Fitzgerald (81), told Channel Nine television station he was “an ordinary chap”, but his alleged crimes showed he had “changed completely” from “the boy we knew”.

In a brief court appearance on Saturday, he flashed a neo-Nazi hand signal while on camera. – Guardian News and Media