Berlin march the biggest yet, with support from teachers, parents and leading scientists 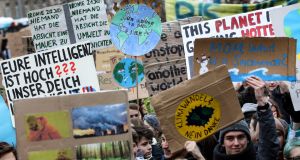 Thousands of students take part in a demonstration against climate change, in Berlin, Germany, on Friday. Photograph: Felipe Trueba/EPA

Irish schoolchildren joined the Fridays for Future marches in Berlin on Friday, as the movement started by Greta Thunberg exploded across Europe – and the globe.

About 300,000 students skipped school on Friday across Germany in dozens of cities – part of 1,660 events worldwide in 105 countries.

“I’m here because I want a future on this planet,” said Kila Donlon, an Irish-German student at Berlin’s Nelson Mandela International School.

Kila and 240 fellow students stopped traffic on their march through the German capital, carrying signs reading “Stop Destroying the Earth. It’s where I get my Tacos” and “Treat the Planet like it is Earth. Not Uranus.”

At the main demonstration in Berlin’s city centre, police said more than 20,000 people picketed the square before Angela Merkel’s chancellery.

Hannah Blitz, a Berlin organiser of Fridays for Future, said: “Politicians have failed to do something against climate change for 40 years. We’re no longer accepting that.”

After a slow build in recent months, Friday’s march was the biggest event yet – with support from teachers, parents and leading researchers. The “Scientists for Future” – 23,000 scientists from German-speaking Europe – have thrown their support behind the new climate movement, and have flagged what they see as climate change slippage in Berlin.

“Only if we act quickly and consequentially can we limit global warming, the mass extinction of animals and plant varieties,” the scientists and researchers said in their manifesto ... “and ensure a future worth living for future generations.”

“Somehow that all went into hibernation during the neo-liberal boom era,” said Dr Hirschhausen, “when we thought the market would regulate everything.”

Amid marches from Warsaw to New Delhi, German scientists said the latest Fridays for Future demonstrations marked a turning point.

“We scientists thought that, if we present our facts soberly, that politicians would react,” said Dr Klaus Jäger, a solar energy researcher at the Helmholtz Centre Berlin. “Now we see facts are not enough to get politicians moving.”

The protests during school hours have divided opinion in Germany. Federal economics minister Peter Altmaier came under fire for suggesting the students should protest on their own – not school – time.

Fridays for Future organiser Kaja Schwab disagreed, saying: “Do you think if we demonstrated after school we could build up such power and pressure on the politicians?”