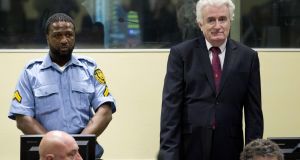 Former Bosnian Serb leader Radovan Karadzic in court on Wednesday in The Hague, where a UN tribunal increased his sentence for war crimes from 40 years to life. Photograph: Peter Dejong/AFP/Getty Images 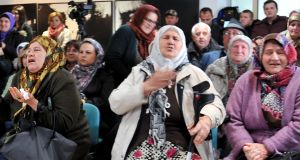 Bosnian Muslim women, survivors of the Srebrenica 1995 massacre, at the Srebrenica memorial in Potocari on Wednesday, where they watched a live television broadcast of the sentencing for war crimes of former Bosnian Serb leader Radovan Karadzic. Photograph: Elvis Barukcic/AFP/Getty Images

A United Nations tribunal has rejected former Bosnian Serb leader Radovan Karadzic’s appeal against his conviction for genocide and war crimes, and increased his sentence to life in jail.

Judges in The Hague upheld a 2016 ruling that Karadzic (73) was responsible for crimes including the 1995 massacre of 8,000 Bosnian Muslims at Srebrenica and the 44-month siege of Sarajevo, which claimed about 10,000 lives.

Presiding judge Vagn Joensen said the original 40-year sentence did not reflect “the extreme gravity of Karadzic’s responsibility for the gravest crimes committed during the period of conflict, noted for their sheer scale and systematic cruelty”.

Reading the verdict of the five-judge panel, Mr Joensen said a life sentence was appropriate given the “extraordinary gravity of Karadzic’s responsibility and his integral participation in the gravest of crimes ... committed throughout the entire area of the conflict in Bosnia”.

Dismissing Karadzic’s appeal, Mr Joensen said his “contention that he was a psychiatrist and poet with no military training ignores his extensive authority over Bosnian military forces.”

Karadzic, still with his familiar shock of white hair, stood glumly in the dock and showed little reaction as the verdict was delivered.

By contrast, Bosnian Muslims whose relatives fell victim to Bosnian Serb atrocities clapped and cheered in the gallery, and then reportedly chased and heckled Karadzic’s lawyer, Peter Robinson.

“He has a lot of regret about what happened during the war and feels very badly for the all of the suffering today... He has a moral responsibility but he feels he does not have an individual criminal responsibility for any of those crimes for which he’s been convicted today,” the lawyer said of his client.

“Karadzic says that if the choice to have an independent [Serb republic in Bosnia] meant that he had to lose his freedom, he’s prepared to make that choice and lose his freedom,” Mr Robinson added.

Karadzic’s wartime military chief, Ratko Mladic, is also appealing against the life sentence he was given in 2017 for genocide and war crimes.

Both men evaded capture for years with the apparent help of old allies and elements of the Serbian and Bosnian Serb security services: Karadzic was arrested in 2008 on a bus in Belgrade, where he was living under a false name as a new-age healer; Mladic was finally caught at a relative’s house in 2011.

Many Serbs, including the current leaders of Serbia and of Bosnia’s Republika Srpska region, acknowledge that their ethnic kin committed crimes during Bosnia’s 1992-5 war but vehemently deny that they constituted genocide.

“I cried because I lost my children, I am all alone. I am very shaken. I lost three sons, my husband, my grandchild, my father died,” Mira Dogas of the Mothers of Srebrenica group told Reuters at The Hague.

“[Karadzic is] still alive while our children have been in the ground for a long time and they had a horrible death. He is alive, he has food and drink. He killed and destroyed our children. I will go home to an empty house tonight and look at the walls. I have nobody.”

1 Donald Trump is in trouble, and that could spell very bad news
2 Taoiseach says €350 pandemic payment to be cut for some part-time workers
3 O’Doherty and Waters ordered to pay legal costs of case against State over Covid-19 laws
4 Madeleine McCann case: ‘We assume the girl is dead’, German prosecutors say
5 Varadkar says Government pushing for quicker easing of lockdown
Real news has value SUBSCRIBE