A short Brexit extension is possible, but only if the UK approves the withdrawal agreement next week, according to Donald Tusk, president of the European Council. Video: European Council 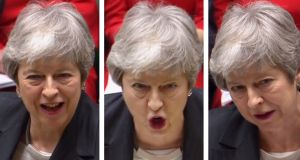 Britain’s prime minister Theresa May speaking during the weekly Prime Minister’s Questions in the House of Commons in London. Photograph: HO/PRU/AFP Photo

British prime minister Theresa May has lashed out at MPs for failing to agree a way to implement Brexit.

In a televised address from 10 Downing Street in London, Mrs May said it was “a matter of great personal regret for me” that Brexit will not go ahead on March 29th.

She blamed MPs for failing to agree a means to implement the result of the 2016 referendum and said she believes British voters wanted this stage of the Brexit process to be over. “I am on your side,” she said, during her address to the British public.

Mrs May adopted a somewhat angry tone during her widely-anticipated address, which turned out to be very short.

“Of this, I am absolutely sure: You the public have had enough. You are tired of the infighting, you’re tired of the political games and the arcane procedural rows, tired of MPs talking about nothing else but Brexit when you have real concerns about our children’s schools, our National Health Service, knife crime,” she said.

“You want this stage of the Brexit process to be over and done with. I agree. I am on your side. It is now time for MPs to decide.”

Earlier, Donald Tusk, president of the European Council, said a short Brexit extension is possible but only if the UK approves the withdrawal agreement next week.

Mr Tusk’s brief statement ahead of Thursday’s EU Council meeting explicitly tied an extension of the Article 50 process to the passage through the House of Commons of the withdrawal agreement, which it has already rejected twice.

Mr Tusk did not take any questions following the statement and said that the EU would continue to seek a positive solution “until the very last moment.”

However, his statement will raise fears that the UK could crash out of the EU without a deal at the end of next week, if the Commons does not approve the withdrawal agreement.

Here is the letter to Tusk: pic.twitter.com/y4eRdGW4Lw

“The view I’m taking and the view of the Irish Government is taking is that we want to avoid no-deal on March 29th. We believe that is what everyone in Europe and certainly the UK wants as well and in that context we’re willing to cut the British Government some slack in terms of their request for an extension.”

However, he insisted the Withdrawal Agreement, the Irish protocol and the backstop could not be changed.

Mrs May has asked the EU for an extension to article 50 delaying Brexit by three months, after a revolt among pro-leave ministers and MPs that threatened her premiership.

However, Mrs May’s request for a short extension angered both the Brexiteers and Remainers in her own party and former British attorney general Dominic Grieve said he had never felt so ashamed to be a Conservative.

“When my right honourable friend the prime minister came to the despatch box today at prime minister’s questions, I confess I think it was the worst moment I have experienced since I came into the House of Commons. I have never felt more ashamed to be a member of the Conservative Party, or to be asked to lend her my support,” he said during an emergency Brexit debate,” he said.

“I have great sympathy for her, I have known her for many years ...but I have to say, I could have wept. Wept at her being reduced to these straits and wept to see her zig-zagging all over the place, rather than standing up for what is in the national interest.”

The British Labour party has called on Mrs May to stop trying to force her Brexit deal through the House of Commons and instead work with other parties to find a compromise plan.

Opening the debate on Wednesday, Labour’s shadow Brexit secretary Keir Starmer said Mrs May was threatening MPs with leaving the EU without a deal.

In her letter to Mr Tusk, Mrs May said that she did not believe it was in either the UK’s or the EU’s interests for Britain to take part in European Parliament elections in May.

She told MPs that she intends to table the Withdrawal Agreement which she has negotiated with the EU for a third time in the Commons next week, in the hope of overturning the massive defeats inflicted on it in January and March.

Brussels has made clear that any extension of the Article 50 negotiation process beyond the end of June would require the UK to elect MEPs to take their seats in the next European Parliament in July.

Mrs May told MPs: “The idea that three years after voting to leave the EU, the people of this country should be asked to elect a new set of MEPs is, I believe, unacceptable.

“It would be a failure to deliver on the referendum decision this House said it would deliver.

“I have therefore this morning written to President Tusk... informing him that the UK seeks an extension to the Article 50 period until June 30th.”

Mrs May will formally make her request to the European Council summit in Brussels on Thursday, where the unanimous approval of all 27 remaining member states is required for any extension.

In her letter to Mr Tusk, Mrs May said that it remains the government’s policy to take the UK out of the EU “in an orderly manner” on the basis of the withdrawal agreement and political declaration agreed in November and supplemented by documents agreed with EC president Jean-Claude Juncker last week.

The agreement was rejected by 230 votes in January and 149 votes earlier this month. Commons Speaker John Bercow this week said he would not allow the same motion to be brought again during this session of Parliament, unless it was substantially changed.

But Mrs May told the Commons: “The Government intends to bring forward proposals for a third meaningful vote. “If that vote is passed, the extension will give the House time to consider the Withdrawal Agreement Bill. If not, the House will have to decide how to proceed. “But as prime minister, I am not prepared to delay Brexit any further than June 30th.”

In a note on the Brexit process reviewed by the European Commission at its weekly meeting on Wednesday, EU officials wrote that leaders meeting Mrs May at a summit in Brussels on Thursday faced a “binary” choice of a short delay of Brexit from March 29th to before May 23rd or a long delay to at least the end of this year, with Britain obliged to hold an election on May 23th for MEPs. “Any extension offered to the United Kingdom should either last until 23 May 2019 or should be significantly longer and require European elections,” the document said. “This is the only way of protecting the functioning of the EU institutions and their ability to take decisions.”

EU states which were due to receive additional legislative seats after Brexit would need to know by mid- to late April if they would be denied those seats because Britain was staying.

The note also said that in any extended membership, Britain should, “in a spirit of loyal cooperation”, commit to “constructive abstention” on key issues, such as the EU’s long-term budget and filling top EU posts after the May election. - Additional reporting PA