Tokayev sworn in as interim president of Kazakhstan

Opinion of outgoing president Nursultan Nazarbayev will have ‘priority importance’ 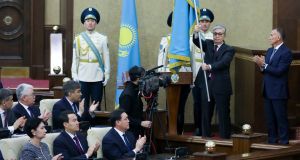 Kassym-Jomart Tokayev was sworn in as interim president of Kazakhstan on Wednesday as the former Soviet central Asian nation prepared to celebrate the annual Nauruz holiday marking the start of spring.

However, while Mr Tokayev’s inauguration opens a fresh page in Kazakhstan’s history, he is unlikely to usher in an era of change and will instead bow to the authority of outgoing president Nursultan Nazarbayev, who resigned this week after almost 30 years in power.

Mr Nazarbayev’s “opinion will have special, one could say priority importance, in the development and adoption of strategic decisions”, Mr Tokayev said in his inauguration speech in Astana, Kazakhstan’s capital, on Wednesday.

Announcing his surprise resignation on Tuesday, Mr Nazarbayev named Mr Tokayev, the chairman of the Kazakh senate, as acting president until the end of his fifth term in 2020. It’s not clear whether Mr Tokayev will be a candidate when Kazakhstan holds a presidential election next year or if he is to play only a temporary, caretaker role, running the day to day affairs of state until a long-term successor is installed.

Mr Nazarbayev described Mr Tokayev as a “responsible and reliable person” whom he could trust to manage Kazakhstan. However, many political observers believe that Mr Nazarbayev – who has retained his position as chairman both of the country’s ruling Nur-Otan party and the powerful National Security Council – intends to choreograph a delicate transition process over the coming months that will see a member of his family installed in power.

Wednesday’s inauguration was full of pomp and ceremony, with goose stepping guards carrying the leather bound Kazakh constitution into the parliament hall where Mr Tokayev was to to take the oath. But it was Mr Nazarbayev, greeted with a standing ovation as he arrived, who was the star of the show.

In his address, Mr Tokayev indicated that preserving Mr Nazarbayev’s legacy was of prime importance. Astana, the capital, would be renamed “Nursultan” to honour the outgoing president and all big Kazakh cities should have Nazarbayev streets, he said. Portraits of Mr Nazarbayev would continue to adorn government offices, perhaps as a reminder that there had been no real change of guard.

Regional leaders who value Mr Nazarbayev as a force for stability and co-operation in Eurasia, said they wanted him to remain an active participant in foreign policy making.

China’s president Xi Jinping ordered his ambassador in Astana to deliver an invitation to Mr Nazarbayev to participate in the Chinese Belt and Road international forum in project in Beijing in April.

Alexander Lukashenko, the president of Belarus, whose country is a partner with Kazakhstan and Russia in the Eurasian Economic Co-operation Union, said he “sincerely regretted” that Mr Nazarbayev had decided to resign. Speaking by telephone on Wednesday, the two men agreed to remain in frequent contact.

In Moscow, Konstantin Kosachev, the head of the foreign affairs committee at Russia’s Federation Council the upper chamber of the parliament said he was convinced that the Nazarbayev epoch was not over, either for Kazakhstan or for the rest of the former Soviet Union.