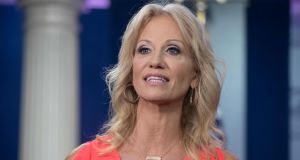 Kellyanne Conway, an adviser to US president Donald Trump, said Sunday that she was a victim of sexual assault and that the supreme court confirmation proceedings of Judge Brett Kavanaugh should not become a broader “meeting” of the #MeToo movement, suggesting instead that victims hold their assailants directly accountable.

Ms Conway made the personal revelation during an interview with Jake Tapper on the CNN programme State of the Union during which she largely derided the “partisan politics” of Mr Kavanaugh’s hearing on Thursday. Dr Christine Blasey Ford said during the hearing that Mr Kavanaugh had sexually assaulted her decades ago when they were teenagers, an allegation he then angrily denied. Many, including Democratic senators, have seen Dr Blasey Ford’s testimony as a rallying cry for survivors of sexual abuse, saying that a vote for Mr Kavanaugh would be an endorsement of not only the alleged behavior but of a culture that condones it and dismisses its victims.

Ms Conway pushed back against that notion. “I feel very empathetic, frankly, for victims of sexual assault and sexual harassment and rape,” Ms Conway said. She then paused and cleared her throat. “I’m a victim of sexual assault,” she said. “I don’t expect Judge Kavanaugh or Jake Tapper or Jeff Flake or anybody to be held responsible for that. You have to be responsible for your own conduct.” She was referring to Senator Jeff Flake, a Republican from Arizona, who had been confronted by two women who said they were sexual abuse victims about his intention to vote for Mr Kavanaugh’s nomination.

Ms Conway said those women should “go blame the perpetrator.” Mr Tapper later said, “This is the first time I’ve ever heard you talk about something personal like that,” adding, “I’m really sorry that you went through that.” He asked a question, noting that Ms Conway works for Mr Trump, who himself has denied allegations of sexual misconduct. “Don’t conflate that with this and certainly don’t conflate that with what happened to me,” Ms Conway responded. “Let’s not always bring Trump into everything that happens in this universe. That’s mistake number one.”

She did not go into further detail about her own experience and could not immediately be reached for comment Sunday. She said she found Dr Blasey Ford “compelling” and “credible.” But she suggested that perhaps Dr Blasey Ford was misremembering who was responsible for the assault, and expressed support for Mr Kavanaugh. “They both could be right that something truly awful happened to her in the summer of 1982 by someone, somehow, somewhere, and that Judge Kavanaugh was not involved,” she said. Ms Conway said that all victims of sexual assault should be heard in courts of law and in criminal or civil proceedings. She emphasised that the Senate proceedings were not a criminal trial, but a hearing on whether Mr Kavanaugh was qualified to serve on the Supreme Court.

“But we do treat people differently who are either the victims or perpetrators of this based on their politics and based on their gender,” Ms Conway said. The FBI is now investigating Dr Blasey Ford’s allegation, though some have questioned the scope of that investigation.–New York Times