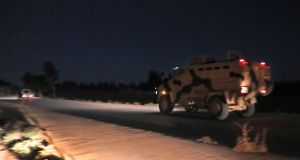 Turkish troop reinforcements on Tuesday streamed into Syria’s Idlib province as the countdown began on the creation of a U-shaped demilitarised buffer zone along the front line between the Syrian army and opposition and radical forces in the mostly rebel-held region.

In a bid to avert an expected humanitarian disaster for Idlib’s 2.5 million civilians if the Syrian army launches an all-out offensive against insurgents, Russian president Vladimir Putin and his Turkish counterpart Recep Tayyip Erdogan agreed on the buffer zone and a timetable for its staged implementation.

All heavy weaponry, such as tanks, rocket launchers and artillery held by insurgents, including factions backed by Ankara, is to be withdrawn from the 15-20km-wide zone by October 10th.

Al-Qaeda’s Hay’at Tahrir al-Sham and affiliates are to evacuate the zone by October 15th, while Turkish surrogates in the National Liberation Front (NLF), which has cautiously accepted the deal, will remain and observe a ceasefire. Tahrir al-Sham could also, reportedly, be compelled to evacuate Idlib city, the provincial capital. Mobile patrols of Russian and Turkish military police will monitor the zone.

An impatient Moscow imposed a clear plan of action on the issue with deadlines on Ankara, which, a year ago, had been tasked with managing a “de-confliction”, or ceasefire, zone in Idlib. Turkey was to separate al-Qaeda from non-al-Qaeda factions and disarm the latter. Instead, Turkey recruited fighters from all factions to be deployed in northern Syrian territory occupied by the Turkish army.

Ankara has 1,200 troops in a dozen observation posts in and around Idlib and can muster NLF fighters if additional muscle is needed to enforce the plan. However, not all NLF fighters are solidly behind the proposal. Some could defect to hardline jihadist factions.

Tahrir al-Sham, which controls 60 per cent of Idlib, has 10,000 fighters and can count on backing from a collection of radical factions if it decides to resist. The group initially dismissed the deal but is to give its decision in the coming days.

Hurras al-Din, a hardline breakaway faction, and Ansar al-Din have rejected the deal. Chechen and Chinese Uighur radicals in the province could follow suit.

In order to avoid war, Turkey has to persuade Tahrir al-Sham to comply and, ultimately, cede territory it controls to the NLF and dissolve or rebrand. Meanwhile, hardcore radicals could be deported. Turkey has not mentioned destinations, although home countries of foreign fighters do not seek their repatriation.

Turkish failure to carry out its obligations could unleash on Idlib the Syrian army, its pro-Iranian allies, and Russia’s air force. Turkey could be obliged to join an offensive to rout all insurgents, including Ankara’s assets, and return Idlib to government rule.

Damascus, which insists Idlib must return to its rule, has complicated Turkey’s daunting task by transferring 400 captured Islamic State (Isis) fighters and their families from the eastern province of Deir al-Zor to Idlib. This boosts Isis’s marginal presence there and risks clashes between it and rival Tahrir al-Sham.

The Isis fighters were said to be sent to Idlib in exchange for the release of Druze civilians from southern Syria held hostage by the group.