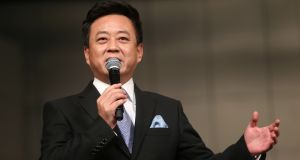 Television host Zhu Jun: might win his case from a legal perspective but may have lost in terms of public opinion and the media. Photograph: Reuters

When a former intern at China’s state broadcaster CCTV alleged she was groped and forcibly kissed by one of the country’s top TV presenters, Zhu Jun, after she brought a bowl of fruit to his dressing room, the star responded by suing her for damaging his reputation and mental wellbeing.

Zhu (54), who is famous for hosting the annual Chinese New Year festival extravaganza, one of the world’s most popular TV shows, named the 25 year old in a civil case in Beijing’s Haidian district court, suing her and a friend, Xu Chao, who has been pushing her case online.

Zhu is seeking an apology from both women, online and in a national newspaper, plus compensation of 655,000 yuan (€82,000) for damaging his reputation and for disturbing his mental wellbeing.

The following day the woman, who is known only by her online name, Xianzi, responded with her own lawsuit, for “infringement of personality rights” because China does not have a law specifically prohibiting sexual harassment. Personality rights covers a number of personal dignity issues.

“I decided that you have to use the law to prove what you said happened,” she said.

It’s the latest in a wave of allegations of sexual abuse against some of the country’s highest-profile men, including religious figures such as Xuecheng, the abbot of Beijing’s Longquan monastery, top media figures and academics. The issue of sexual abuse by powerful figures was highlighted last month with the arrest in Minnesota of the billionaire Richard Liu, chief executive of ecommerce giant JD.com, on charges of rape.

While the #metoo movement is growing in China, it is viewed with discomfort in a country where security and stability are a governmental obsession and where women still do not occupy prominent positions of power.

The alleged incident is said to have taken place in Zhu’s dressing room about four years ago. Xianzi says she reported it to the police afterwards, but was told to drop the allegations because he was a prominent figure who had a “positive effect” on society. Xianzi also alleges that she received phone calls afterwards threatening herself and her family.

Since going public, Xianzi has received widespread support online. “Xianzi is brave as most of people would have just kept it to themselves,” said Niu Shidan (37), who works for a trading company. “If the assailant is a man, then one or two female victims can create some waves. In Zhu’s case it is more serious, as more and more people are giving their voices against him. Nowadays public opinion is very strong.”

Another commentator, Da Tianxia, wrote on the Sina Weibo social network that Zhu might win his case from a legal perspective, but he has lost in terms of public opinion and the media.

“Sexual harassment is indeed so difficult to obtain evidence, but she was brave and she has reported to the police when it happened,” wrote Da, while Quanshi Shuaige said: “It doesn’t matter if you win in the court or not. It is already a victory as long as you stand up and expose the evil.”