Brazilians take to streets to demonstrate against Jair Bolsonaro 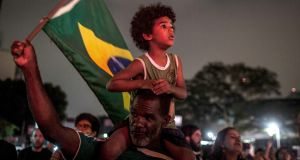 Hundreds of thousands of Brazilians took to the streets this weekend to protest against far-right presidential candidate Jair Bolsonaro who leads opinion polls ahead of Sunday’s first round of voting.

Organised on social media by feminist groups under the hashtag #elenão – not him – the demonstrations were the largest popular mobilisation so far of the election campaign and the biggest since the impeachment crisis of 2016 that saw president Dilma Rousseff removed from office.

Bolsonaro was the target of women’s rights groups because of his history of trivialising rape and defence of unequal pay for women, arguing this is an inevitable consequence of the fact they become pregnant. Counter demonstrations in favour of the retired army captain were also held but attracted much smaller numbers.

In most cities police declined to estimate the size of the crowds. The biggest turnout was on Saturday in São Paulo where organisers estimated more than 150,000 people filled a city plaza. Several of Bolsonaro’s rivals in the presidential contest were present but the day belonged to social movements representing groups that have been disparaged and attacked by Bolsonaro over the years. As well as the feminist groups who called for the mobilisation, also present in large numbers were gay rights and anti-racism campaigners.

In total, organisers estimate 500,000 people took part in anti-Bolsonaro demonstrations in more than 65 cities across the country.

Though leading in opinion polls, Bolsonaro has the highest rejection rating of any candidate and surveys show he faces an uphill climb to win a likely second round which will be held on October 28th if there is no outright winner on Sunday.

Bolsonaro’s history of misogynistic statements has turned women into the main obstacle to his reaching the presidency. Over half of women polled say they would never vote for him under any circumstances and his support among female voters is just half that among male ones.

Earlier on Saturday, he was released from hospital in São Paulo more than three weeks after he almost lost his life following his stabbing at a campaign rally. On boarding a commercial flight to Rio de Janeiro, he was greeted with a chorus of cheers and boos from fellow passengers.

The weekend’s protests against him followed revelations in local media that Bolsonaro’s former common-law wife told Brazilian diplomats in Norway she had fled the country in 2009 in fear of her life during the couple’s separation and that he sought to hide the true size of his wealth from authorities.

Now back in Brazil and supporting her ex-husband’s campaign for the presidency, Ana Cristina Valle responded to the publication of the diplomatic telegrams referring to her case by saying she was “talking rubbish” and lied to diplomats because she was hurt by the separation and a dispute over alimony for the couple’s son.

She also said she lied when she described her ex-husband to diplomats as explosive and excessively aggressive. A candidate for congress, Ms Valle is using her former partner’s name on the ballot sheet.