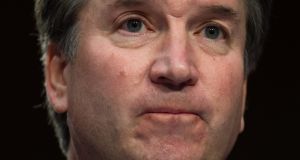 Judge Brett Kavanaugh testifies on the second day of his US Senate Judiciary Committee confirmation hearing while under fire for sexual misconduct claims. Photograph: Saul Loeb/AFP/Getty

In lengthy comments delivered on the fringes of the UN general assembly in New York, Mr Trump directly questioned the credibility of Mr Kavanaugh’s accusers. Referring to Deborah Ramirez, the woman who says Mr Kavanaugh exposed himself to her while both were students at Yale University, he said: “The second accuser has nothing . . . She admits that she was drunk; she admits time lapses.

“This is a con game being played by the Democrats. It’s a shame that you can do this to a person’s life,” he said.

His comments came a day after Mr Kavanaugh insisted in a Fox News interview that he would not withdraw his nomination to serve on the supreme court .

“I’m not going anywhere,” said Mr Kavanaugh, who was flanked by his wife Ashley for the sit-down interview with host Martha McCallum. “I’m not going to let false accusations drive us out of this process.”

The decision to partake in a televised interview is unprecedented for a supreme court nominee and reflects the depths of concern in Republican circles about Mr Kavanaugh’s nomination following two allegations of sexual misconduct.

In a sometimes-tense interview, Mr Kavanaugh was directly asked about his sexual history. “I’ve never sexually assaulted anyone. I did not have sexual intercourse or anything close to sexual intercourse for many years thereafter,” he said, referring to his time in high school and subsequent years, prompting his interviewer to ask: “So you’re saying through all these years that you were in question you were a virgin?”

The interview was aired ahead of Mr Kavanaugh’s next appearance before the Senate judiciary committee. He is due to testify on Thursday after his accuser hears from Christine Blasey Ford, the California-based academic who claims Mr Kavanaugh assaulted her when both were high school students in the early 1980s.

“The president’s been clear. Let’s let them speak but let’s also let Brett Kavanaugh speak and let’s let him tell his side of the story,” Ms Huckabee Sanders said. But she lambasted Democrats for turning the nomination process into a “circus”.

On Capitol Hill, the Republican leadership doubled-down on its support for Mr Kavanaugh, indicating that the Senate would move forward with a vote as soon as possible after Thursday’s hearing.

Republican members of the 21-member Senate judiciary committee indicated that they could vote on Mr Kavanaugh’s nomination on Friday. This would pave the way for a full Senate vote as early as next week.

But Lisa Murkowski, a Republican senator from Alaska, appeared to back Democrat calls for an FBI investigation into the allegations against Mr Kavanaugh, saying this would “clear up all the questions” surrounding him.

With Republicans holding only a slim majority in the Senate, focus is turning to a handful of Republican senators, including Ms Murkowski, who have not yet committed to endorsing Mr Kavanaugh.