Judge threatens to revoke Weinstein’s bail over phone in court

‘He did hand over his phone, but then he had two more,’ furious judge tells defence counsel 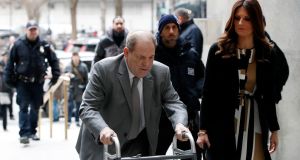 In the frame: Former Hollywood producer Harvey Weinstein arrives at court for the start of jury selection in his sexual assault trial with his lawyer Donna Rotunno at New York State Supreme Court. Photograph: EPA

The second day of Harvey Weinstein’s rape trial in Manhattan kicked off with sparks flying as the judge threatened to jail the movie mogul for using his mobile phone in court while defence lawyers protested that their client was not receiving a fair and impartial hearing.

The usually mild-mannered judge, James Burke of New York county supreme court, responded in fury when it emerged that Mr Weinstein had used his phone inside the courtroom soon after arriving on his trademark walking frame, despite numerous orders not to do so.

“Mr Weinstein, I cannot implore you more not to answer the phone,” the judge said. “Is this really the way you want to end up in jail for the rest of your life – by texting in violation of a court order?”

The judge told the movie producer’s lead lawyer, Arthur Aidala, that if Mr Weinstein was caught in the act again his $2 million (€1.8 million) bail would immediately be revoked.

“My advice to you is before you come into the courtroom take his [Mr Weinstein’s] cellphone and put it in your briefcase. It’s my understanding that he did hand over his phone, but then he had two more,” he said.

When Mr Weinstein looked as though he were preparing to say something, the judge snapped: “You might want to invoke your right to counsel in silence right now.”

The most intensely watched criminal trial of the century in the US has begun with heated exchanges between opposing lawyers even before the trial proper begins.

Mr Weinstein is accused of five counts of serious sexual offences that could see him sentenced to life in prison, relating to allegations that he abused his power as a movie titan to prey on vulnerable women, claims that trigged the #MeToo movement.

The film producer was accused of raping one woman and sexually assaulting another in separate incidents over a two-day period in 2013.

Prosecutors at the New York trial said one of the cases in the LA charges had elements overlapping with the Manhattan trial but the second woman – representing the more serious charge – was entirely separate.

On the back of the news out of LA, Mr Weinstein’s lawyers made y attempted to get the New York trial adjourned on grounds that the fresh criminal charges would taint any jury.

It followed their unsuccessful efforts last year to persuade the judge to move the trial out of New York City to some other part of the state, on the grounds that Manhattan was the media capital of the world and deeply prejudiced against Mr Weinstein.

Mr Aidala argued that the LA announcement had been a co-ordinated move designed to harm Mr Weinstein. “This was Christmas for the prosecution,” he said.

He said news outlets such as the Daily News, New York Post, New York Times, Wall Street Journal and others had reported the new LA charges in prejudicial terms. “I cannot think of one case where the day of jury selection this kind of prejudice was being cast against the criminal defendant,” he said.

Mr Aidala added colourfully that when the defence went out to dinner on Monday, “the next table were, ‘Did you hear about Weinstein, the new charges?’ It was the talk of the town”.

Judge Burke took little time to reject the request for an adjournment. He said the premise at the start of all criminal trials was that the defendant was innocent and the New York jury would be instructed as such.His advice to Mr Aidala was to stop “trying to ring a bell that really has no resonance”.

The court has now turned to the prolonged and arduous job of selecting a jury of 12 women and men and six alternates. The pool begins with 120 potential jurors.

As a first round of the filtering process, potential jurors are being asked to fill out a questionnaire that includes a number of questions on Mr Weinstein. It says there has been wide publicity about him over the last year, and asks: “Can you assure all parties that you will determine this case based only on the evidence you will hear in court?”

The questionnaire asks potential jurors what they have heard about the defendant and if it affects their ability to be fair and impartial. It also asks whether they or a family member or close friend has been the victim of physical or sexual abuse.

The trial proper, starting with the opening argument of the prosecution, is likely to begin on January 21st. – Guardian