US girl (13) killed in attack on family in Mexico 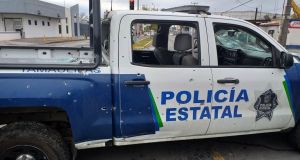 A view of a police vehicle in Nuevo Laredo, Mexico. A 13-year-old girl has been killed in an attack on a family south of the city. File photograph: STR/EPA

A 13-year-old American girl was killed over the weekend after the vehicle she and her family were travelling in came under fire on a highway south of the Mexican border city of Nuevo Laredo, state security officials said on Monday.

The attack took place in the violent Gulf Coast state of Tamaulipas near the town of Ciudad Mier, about 130km south of Nuevo Laredo, which lies opposite Laredo, Texas.

The area is known as a hot spot in Mexico’s long-running drug wars where rival cartels battle over lucrative cross-border smuggling routes and control of other illicit activities.

The girl’s 10-year-old brother, also a US citizen, was injured in the attack, along with the children’s parents, who are Mexican nationals but legal residents of the US, a state security source told Reuters.

The boy and his 48-year-old father and 42-year-old mother all remain in a local hospital, the source said, who described their condition as “serious but stable”.

The source said the family was travelling Saturday night on an isolated stretch of highway at the time of the attack.

Tamaulipas state security officials said in a statement on Sunday the family lives in the US, and that an investigation had been launched.

“Initial reports indicate the victims were travelling Saturday evening toward the border to continue on to the United States, where they reside, when armed individuals stopped them and shot at them,” the statement said.

The family was travelling in a truck and accompanied by another vehicle driven by relative who was also injured in the attack, the statement said.

The statement said a third vehicle with Tamaulipas plates was found at the scene and was likely used by the attackers, then abandoned after a collision. – Reuters