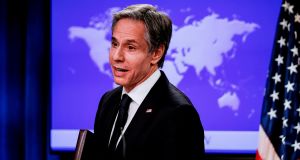 The White House has suspended arms sales agreed by Donald Trump to two Gulf allies, the first significant move by President Joe Biden to reset US relations with Sunni Arab regimes heavily courted by his predecessor.

The temporary freeze puts a landmark deal to sell 50 F35 fighter jets to the United Arab Emirates, as well as other arms destined for Saudi Arabia, on hold.

Antony Blinken, the new secretary of state, has endorsed a series of Trump-brokered accords to normalise ties between Arab allies and Israel, which started with an agreement with the UAE in August. But he told reporters he was reviewing the commitments made in order to secure those pacts.

The Trump administration agreed the F35 sale after the UAE agreed to formalise diplomatic relations with the Jewish state. Mr Trump also recognised Morocco’s sovereignty over the disputed territory of Western Sahara, in contravention of diplomatic norms, after Rabat agreed to normalise ties with Israel.

Saudi Arabia had been expecting the new US administration to take a tougher stance after Mr Biden criticised human rights abuses under Crown Prince Mohammed bin Salman’s watch and vowed to “review” relations with the kingdom.

Mr Trump had put arms sales to Saudi Arabia – one of the world’s biggest weapons buyers – at the core of his relationship with Prince Mohammed, standing by the kingdom’s day-to-day ruler despite the brutal 2018 murder of journalist Jamal Khashoggi by Saudi agents. He also vetoed a bipartisan Bill to end US support for the Saudi-led coalition fighting in Yemen’s civil war.

In another blow to Riyadh, Mr Blinken said he would review sanctions imposed on Iranian-aligned Yemeni rebels after warnings that the measures risked triggering the world’s worst famine in decades.

While Mr Blinken accused the group of committing atrocities, he said the US should be focused on alleviating a humanitarian catastrophe.

Saudi Arabia and the UAE intervened in the war in Yemen to fight the Iranian-backed Houthis after the rebels seized Sana’a, the capital, in 2014 and forced the Yemeni government into exile.

“We’ve seen a campaign [in Yemen], led by Saudi Arabia, that has also contributed to what by many estimates is the worst humanitarian crisis in the world today, and that’s saying something,” Mr Blinken said. It was “vitally important” to get humanitarian assistance to people in desperate need, he added.

While Mr Blinken said he had “real concerns” about some policies pursued by Riyadh, he also said the US “should do what we need to do to help defend Saudi Arabia against aggression directed at Saudi Arabia, including from Yemen and from the Houthis”.

The Houthis have fired scores of missiles and drones at Saudi Arabia, targeting airports and oil infrastructure.

The UAE, which had also drawn criticism in the US for its role in the Yemen war, was hoping that its decision last year to normalise relations with Israel would win goodwill with Mr Biden’s team.

Both the UAE and Saudi Arabia are critical US allies in the Middle East and supported Mr Trump’s decision to pull out of the 2015 Iranian nuclear deal and impose sanctions on Tehran.

In addition to US criticisms for its role in inflaming the Yemeni war, UAE has faced opprobrium for its support of Khalifa Haftar, a renegade Libyan general who has challenged the internationally recognised regime in Tripoli. – Copyright The Financial Times Limited 2021