Coronavirus continuing to mutate, study finds, as US cases rise

US study did not find mutations made it more lethal 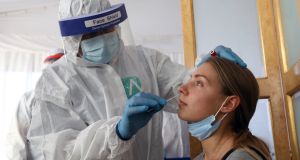 The Covid-19 virus is continuing to mutate throughout the course of the pandemic - study. Photograph: Khaled Elfiqi/EPA

The Covid-19 virus is continuing to mutate throughout the course of the pandemic, with experts believing it is probably becoming more contagious, as coronavirus cases in the US have started to rise once again, according to new research.

The new US study analysed 5,000 genetic sequences of the virus, which has continued to mutate as it has spread through the population. The study did not find that mutations of the virus have made it more lethal or changed its effects, even as it may be becoming easier to catch, according to a report in the Washington Post, which noted that public health experts acknowledge all viruses have mutations, most of which are insignificant.

David Morens, a virologist at the National Institute of Allergy and Infectious Diseases, said that the new study should not be over-interpreted, but added that the virus could be responding to public health interventions such as social distancing.

“All those things are barriers to transmissibility, or contagion, but as the virus becomes more contagious it statistically is better at getting around those barriers,” he said.

Morens noted that this could mean that the virus might continue to mutate even after a vaccine is available, meaning the vaccine will have to be tinkered with – just as the flu vaccine is altered each year.

Twenty states have experienced over 5 per cent increase in their Covid-19 cases over the last two weeks, according to data from Johns Hopkins University.

The US saw 38,204 new cases on Wednesday, bringing the country’s total number of cases seen to nearly 6.9 million. The country surpassed 200,000 coronavirus deaths on Tuesday, seeing between 300 to 1,000 deaths a day.

The US continues to lead as the country with the highest number of coronavirus cases and deaths.

Public health experts say it is too early to tell whether the rise in cases is a brief uptick as a consequence of Labour Day holiday gatherings in early September or whether it is the start of an uptrend as the weather starts to cool in many regions and people head indoors. Experts have warned that both events, in addition to K-12 schools and college campuses reopening, could lead to a rise in cases.

At a hearing before Congress on Wednesday, Dr Robert Redfield, the director of the Centres for Disease Control and Prevention (CDC), emphasised data that shows that young Americans have been driving the rise in cases. According to Redfield, people aged 18 to 25 have made up 26 per cent of new coronavirus cases - the largest of any age group.