America Letter: Irish influence in Congress is strongest it has been since Brexit vote 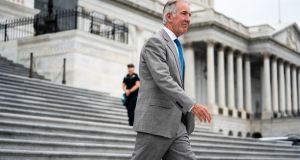 House Ways and Means committee chairman Richard Neal said he hoped that the British government ‘upholds the rule of law and delivers on the commitments it made during Brexit negotiations’. Photograph: Erin Schaff/New York Times

The long-standing links between Ireland and the US came to the fore this week, as the latest development in the Brexit negotiations made waves stateside.

News of the British government’s decision to introduce domestic legislation at odds with the withdrawal agreement it signed with the European Union last year prompted a swift reaction from senior Irish-Americans on Capitol Hill.

On Tuesday night, House Ways and Means committee chairman Richard Neal said he hoped that the British government “upholds the rule of law and delivers on the commitments it made during Brexit negotiations”.

It was followed by a strong statement by House speaker Nancy Pelosi warning that there was “absolutely no chance of a US-UK trade agreement passing Congress” if Britain violates an international treaty and undermines the Belfast Agreement.

How can they walk away from an international agreement? How can you trust that?

As Congress returned to Washington midweek after recess, much of Pelosi’s first press conference after the summer break featured Brexit.

Asked about her response to the latest developments by The Irish Times, the speaker replied: “What were they thinking?” Her phone had “not stopped ringing” between constituents concerned about the Californian wildfires and the news from London, she said.

“How can they walk away from an international agreement? How can you trust that?”

She added: “Our message is very clear. Self-determination is what the people of the UK have determined – their course of action, that’s up to them. But it’s not up to them to think that they will be rewarded if they mess with the Good Friday [Belfast] accords.”

Pelosi’s uncompromising comments were a blow to British officials who, like their Irish counterparts, had been working the phones in Washington.

Much of Pelosi’s exasperation at the British position can be traced to a somewhat heated meeting between a visiting US congressional delegation and the European Research Group (ERG) in London last year, just before their visit to Dublin and Belfast. In particular, the stance of Jacob Rees-Mogg, who dismissed their concerns about the Border as a concocted issue, infuriated Pelosi and others present.

More than a year later, it has become abundantly clear that she holds the cards.

While many Brexiteers were cheered by the election of Donald Trump (unlike Barack Obama, he supported Brexit and promised a quick trade deal with the UK), the realities of the US constitutional system soon became apparent.

Although the US executive branch – through the trade representative – negotiates trade deals, any agreement needs congressional approval.

A US-UK trade deal may have been possible in the first two years of the Trump presidency, when Republicans were in control of both houses of Congress, but the midterm elections of 2018 were a game-changer. When Democrats assumed the majority, Massachusetts congressman Neal was appointed as chair of the Ways and Means committee – the oldest committee in Congress – with authority over tax and trade affairs.

The appointment took the British embassy by surprise – it was confronted with the reality of an Irish-American with direct influence over the outcome of UK trade negotiations.

Of course, Britain’s stature in the United States cannot be underestimated: as a long-standing military ally of America and member of the “Five Eyes” group that shares military intelligence, it is a hugely important strategic partner.

But congressional approval is a prerequisite for a trade deal. For this reason, while the prospect of a Biden presidency is worrying many in London given Biden’s Irish roots, a change in administration is unlikely to have much material impact on the direction of the trade talks.

Of more concern will be the almost certain return of Pelosi and Neal to the House after November’s elections, when Democrats are expected to retain their majority.

It’s worth noting that negotiations have begun on a bilateral US-UK trade deal, and the fourth round of talks got under way this week. While progress was made in the early stages, according to officials, it is now believed that the Northern Ireland issue will need to be resolved before any deal will be taken up by the House.

The lines of communication between London and Washington are open: Neal spoke to Northern Ireland secretary Brandon Lewis on Wednesday, and foreign secretary Dominic Raab will visit Washington next week, where he is due to speak with Pelosi.

While Raab may have expected to focus his trip on issues such as security, Huawei and developments in the Middle East, Britain is again finding that Northern Ireland is the issue that won’t go away.