Two police officers have been shot and wounded after a grand jury decision not to prosecute police officers for the death of 26-year-old Breonna Taylor in March, 2020 sparked protests in Louisville, Kentucky. 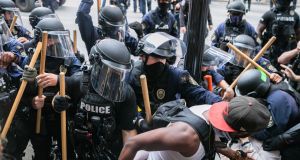 Police clamp down on street protesters in Louisville after a grand jury decided not to bring charges against officers who shot and killed Breonna Taylor. Photograph: Xavier Burrell/New York Times

Two police officers were shot, and more than 100 people were arrested as protests erupted in Louisville, Kentucky, after a grand jury declined to directly charge officers for the killing of 26-year-old Breonna Taylor.

Ms Taylor was shot dead in her apartment on March 13th by police who had a search warrant for the property. The police opened fire after her boyfriend, Kenneth Walker, first shot at them. Mr Walker said that both he and Ms Taylor thought there were intruders in the apartment.

On Wednesday, a grand jury indicted one of three police officers involved with “wanton endangerment” after he fired into an adjacent apartment where three people were sleeping. But the other two officers who fired the shots that killed Ms Taylor were not charged.

Announcing the decision, Kentucky attorney general Daniel Cameron said that while the incident was a tragedy, the two police officers “were justified in their use of force having been fired upon by Kenneth Walker”.

Kentucky’s “vigorous laws on self-defence”, in the words of Mr Cameron, prevented any homicide charges being filed. Under Kentucky law, the two officers had the right to fire after they came under fire.

Questions also remain over the warrant issued to the officers. While the police were searching for drugs or money, nothing was found in the apartment. 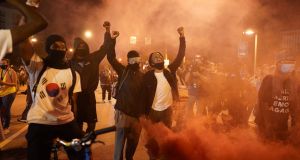 The police were monitoring another man, Jamarcus Glover, who Ms Taylor had previously dated and who was suspected of running a drug-trafficking operation.

As violence broke out in Louisville on Wednesday night, Larynzo Johnson (26) was arrested in connection with the shooting of two police officers. He was charged with 14 counts of wanton endangerment and two counts of assault on a police officer and is due in court on Friday.

One of the injured officers underwent surgery for an abdomen injury and remained in hospital, according to officials, while the other was released from hospital after being treated for a leg wound. Neither has life-threatening injuries, Louisville police chief Robert Schroeder said.

In total, 127 people were arrested overnight, police said. Louisville has been the site of more than 100 consecutive nights of protest, after the death of African-American man George Floyd in Minneapolis in May refocused attention on Ms Taylor’s death in March.

Speaking at a press conference on Thursday, Louisville’s mayor, Greg Fischer, said that while he understood the community was hurting, the shooting of the officers was “completely unacceptable”.

“I give my regards to the family of Breonna Taylor,” he said. “It’s sad . . . everything about that case, including law enforcement. So many suffering, so many people needlessly suffering.”

He said that while he supported peaceful protests, “when it gets less than peaceful, as you see all over, then it’s unacceptable and that’s where law and order is necessary, and that is why law enforcement is very important”.