Super Tuesday: What’s at stake on the biggest night of the US primaries 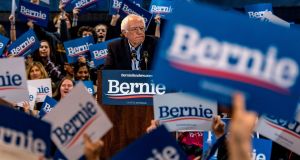 Super Tuesday is the most important day in the Democratic primary calendar as the party’s presidential hopefuls vie for the chance to take on Donald Trump in November’s election.

Voters in 14 states, plus the territory of American Samoa, will cast their ballots in contests that will apportion more than a third of all the delegates who will select the Democrats’ nominee at the party’s national convention in July.

Following Joe Biden’s decisive victory in Saturday’s South Carolina primary, and the subsequent withdrawal from the race of Pete Buttigieg, Amy Klobuchar and Tom Steyer, Super Tuesday is shaping up to be a close contest between Biden and current frontrunner Bernie Sanders. It is also a pivotal day for Mike Bloomberg, the billionaire former mayor of New York, who will appear on ballots for the first time, having skipped earlier contests.

The Super Tuesday results will help dictate the likelihood of a contested convention – a potentially combustible scenario in which no candidate receives a majority of delegates before voting formally begins in July.

What is Super Tuesday?

Voters will choose their preferred Democratic candidates in 15 contests that will elect 1,344 delegates to the Democratic convention, more than a third of the slightly less than 4,000 total. The elections will include the two most populous states, California and Texas, which have 415 and 228 delegates, respectively.

The four states that have held their primaries or caucuses so far – Iowa, New Hampshire, Nevada and South Carolina – together account for just 155 delegates, or less than 4 per cent of the total.

Super Tuesday has historically narrowed the field of candidates. Those who fail to win delegates in key states will probably have trouble fundraising or qualifying for future debates.

Texas has open primaries, meaning all voters can vote in the Democratic primary regardless of party registration. South Carolina’s open primary system drew attention when some conservative activists in South Carolina urged Republicans to vote for Sanders in Saturday’s primary in a move they dubbed “operation chaos”.

How are delegates allocated?

Even if candidates do not win the state, they can still rack up delegates. Unlike the winner-take-all approach of the general election in November, the Democratic primaries and caucuses allocate delegates on a proportional basis.

Each state’s total number of delegates is determined by a formula that takes into account its population and its support for Democratic candidates in the last three presidential elections.

There are also “unpledged” delegates, also known as “superdelegates”, who are free to support any candidate they choose. In the 2016 election, superdelegates became controversial because their commitments effectively secured Hillary Clinton’s nomination over Sanders. Since then, the voting powers of such delegates have been significantly reduced. They will only come into play in the event of a contested convention.

What is likely to happen?

Super Tuesday looks likely to establish Sanders and Biden as the frontrunners, according to polling data compiled by RealClearPolitics.

In California, the largest state holding its primary on Tuesday, Sanders holds a double-digit lead over Biden. However, both Biden and Elizabeth Warren are also polling over 15 per cent in California, so even if Sanders wins California his main rivals may also end up collect some delegates there.

Sanders is also the frontrunner in Texas, the second-largest state holding its primary on Super Tuesday. Polls there suggest Sanders is in a much closer four-way contest with Biden, Bloomberg and Warren.

Polling data is more limited in other Super Tuesday states, but Biden currently has about a 2 point lead over Sanders in North Carolina. Sanders leads by a double-digit margin in Virginia over Biden, and over Warren in Colorado and Utah.

It was unclear how Biden’s resounding victory in South Carolina and ensuing endorsements from party members and former rivals would impact the final outcome.

Several candidates will be looking to capitalise on a home state advantage. Sanders looks likely to win his home state of Vermont by a wide margin. Warren is facing a tough challenge from Sanders in her home state of Massachusetts.

What about Mike Bloomberg?

Super Tuesday will mark the first test for Bloomberg, who skipped the contests in the four traditionally important, but relatively small, states that voted in February.

Instead, he has opted to spend lavishly on broadcast and social media advertising in states voting on or after Super Tuesday, prompting other candidates and their supporters to accuse him of trying to buy the election.

He is currently polling at 15 per cent in California, only just breaching the statewide threshold for gaining delegate votes, though he may stand to get a larger number of delegates allocated based on the vote shares in the state’s 53 congressional districts.

What happens to delegates if candidates drop out?

It depends. Pledged delegates at the district level will become free agents if their pledged candidate withdraws.

Although they can theoretically vote for whomever they choose, if their candidate endorses one of the remaining Democrats before the convention, it is likely that candidate’s delegates would follow suit.

Statewide delegates are more complicated. Although the results of state primaries determine how many delegates each candidate gets, the delegates themselves – the people who cast their ballot at the convention in July – are not chosen until a later date, according to political scientist Josh Putnam, who runs the blog FrontloadingHQ and keeps a calendar of delegate selection dates.

There is also a difference between suspending one’s campaign and formally withdrawing, says Putnam. Buttigieg, for example, can hold on to his eight statewide delegates as long as his campaign remains suspended. – Copyright The Financial Times Limited 2020

1 Gardaí break up rave attended by 60 people at Dublin flat complex
2 Brexit: Irish hauliers seek State help to bypass UK ‘land bridge’
3 The FinCEN files: The billion dollar a month money trail
4 The Sack of Balbriggan: The burning of a town that shocked the world 100 years ago
5 Coronavirus: 396 more cases as public is urged to help protect ‘older and vulnerable’
Real news has value SUBSCRIBE