UK Labour Leader Jeremy Corbyn has told his shadow cabinet that the party would launch the “most ambitious and radical campaign for real change our country has ever seen” now that a no-deal Brexit was “off the table.” Video: Reuters 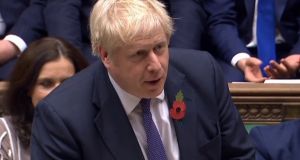 Boris Johnson is expected to call on MPs once again to support his quest for a pre-Christmas election in order to break the Brexit deadlock. Photograph by HO/PRU/AFP/ Getty Images)

MPs in the House of Commons have voted for a UK general election to be held on December 12th.

The vote, on the Early Parliamentary General Election Bill, proposed by prime minister Boris Johnson, was carried by 438 to 20 on Tuesday night.

Earlier, MPs voted by 315 to 295 to reject a Labour amendment for the proposed polling day to be moved to December 9th — three days earlier than ministers wanted. The vote effectively clears the way for parliament to be dissolved on November 6th, paving the way for an election on December 12th.

Addressing Tory MPs afterwards at Westminster, Mr Johnson said that he was prepared for a “tough” election fight in the weeks ahead. “I think it’s time for the country to come together, get Brexit done and go forward,” he said.

“It’ll be a tough election and we are going to do the best we can.”

The opposition parties had wanted to bring forward polling day to cut off any possibility Mr Johnson could make a fresh attempt to ram through his Brexit deal before Parliament is dissolved.

Mr Johnson earlier argued that a “new and revitalised” parliament was needed to take Britain out of the European Union as he introduced the legislation.

He accused MPs of trying to delay Brexit “forever” in a combative speech after Jeremy Corbyn said Labour would back a general election.

He took aim at Mr Corbyn’s previous opposition to having an election, and claimed Labour was not interested in delivering Brexit.

“All they want to do is procrastinate,” he told the Commons. “They don’t want to deliver Brexit on October 31st, on November 31st (sic), even on January 31st.”

Mr Johnson said an election was needed because delaying Brexit is “seriously damaging to the national interest”, while a fresh parliament would have a “new mandate to deliver on the will of the people and get Brexit done”.

He put forward the short Bill, which sets aside the Fixed-Term Parliaments Act (FTPA), after previous attempts to have MPs approve an election were stymied by the fact that the act demands a majority of two-thirds of MPs to support holding an election.

However, Mr Corbyn told his shadow cabinet he would back an early election now that a no-deal Brexit was “off the table”. His announcement came after Mr Johnson formally accepted a Brexit extension, definitively breaking his “do or die” commitment to leave the EU by October 31st.

In a post on Twitter, European Council president Donald Tusk, who is due to be succeeded in the role in the coming days, said: “To my British friends, the EU27 has formally adopted the extension. It may be the last one. Please make the best use of this time. I also want to say goodbye to you as my mission here is coming to an end. I will keep my fingers crossed for you.”

Ten MPs who were expelled from the Conservative Party last month after rebelling over Brexit have had the whip restored. Senior figures including Sir Nicholas Soames and Alistair Burt were among those who have been readmitted to the parliamentary party following a meeting with the prime minister.

Twenty-one MPs were kicked out of the party last month after they backed a plan to take control of the Commons timetable to pass legislation to block a no-deal Brexit. Former ministers Caroline Nokes, Greg Clark, Ed Vaizey, Margot James, Richard Benyon, Stephen Hammond, Steve Brine and Richard Harrington have also had the whip restored.

Meanwhile Owen Smith, the Labour MP for Pontypridd and shadow secretary for Northern Ireland, has said he will not stand at the coming general election. – PA