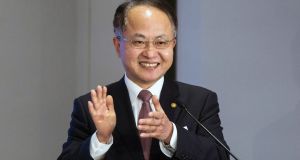 China has replaced the head of its Hong Kong liaison office, the most senior mainland political official based in the Chinese-controlled territory. Photograph: Jerome Favre

China has replaced the head of its Hong Kong liaison office, the most senior mainland political official based in the Chinese-controlled territory, following more than six months of often-violent anti-government protests in the city.

China’s Ministry of Human Resources and Social Security said on its website late on Saturday that Wang Zhimin, who had held the post since 2017, had been replaced by 65-year-old Luo Huining, who until November was the top official of China’s ruling Communist Party in the northern province of Shanxi.

Beijing has been considering potential replacements for Wang since November, in a sign of dissatisfaction with the Liaison Office’s handling of the crisis, the worst since the city reverted from British to Chinese rule in 1997.

Saturday’s statement gave no other details on the change.

The Liaison Office, which reports to China’s State Council, serves as the platform for Beijing to project its influence in the city, and has come in for criticism in Hong Kong and mainland China for misjudging the situation in the city.

Mr Wang is the shortest serving Liaison office director since 1997.

Mass protests erupted in June in Hong Kong over an extradition bill that would have allowed individuals to be sent for trial to the mainland, where justice is controlled by the Communist Party. Though the bill was withdrawn, protests have continued over a broad perception that Beijing is meddling improperly in city affairs and complaints of police brutality. –Reuters