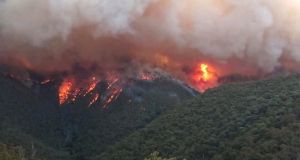 The navy began evacuating thousands of people stranded in tourist towns along Australia’s east coast on Friday as the escalating bush fire disaster and the return of hot windy conditions looked set to intensify pressure on prime minister Scott Morrison.

In scenes that witnesses said resembled a war zone, holidaymakers – some wearing masks to protect themselves from smoke – were ferried to naval vessels from the beach at Mallacoota, a seaside town in Victoria.

Daniel Andrews, Victoria’s premier, has declared a “state of disaster” in those areas to facilitate forced evacuations and the use of private property to fight the wild fires that are raging across an area larger than many European countries. Many roads to the coastline remain blocked by fires. Firefighters have warned they cannot guarantee people’s safety in the deteriorating conditions.

“We face unprecedented risk to life and property in coming days,” said Mr Andrews, who revealed there were 28 people missing in parts of the state affected by the fires. “We have grave fears for the safety and wellbeing of those 28 people who cannot be located.”

The unfolding disaster is far larger in terms of the area covered than other recent large-scale fires, such as the blazes in the Brazilian rainforest last summer, or the California wildfires in 2018.

Scientists say that the hotter temperatures brought about by climate change, combined with shifting weather patterns, could add to the severity of extreme fires.

“Climate change generally means you are beginning to develop longer fire seasons, so you have more fuel available, a longer period to burn, and less precipitation,” said Andrew Scott, professor of earth sciences at Royal Holloway University of London and author of Burning Planet: The story of fire through time.

Strong winds have also been a big factor, causing the fires to spread unusually quickly. “One of the things we have noticed with these fires is that they are moving so much faster, driven by strong winds,” Prof Scott added.

When fires occur on such a large scale, often they are fully extinguished only with the arrival of rain or other changes in weather conditions, Prof Scot pointed out. However no rain is forecast in the affected parts of Australia in the immediate future.

The scale of the emergency – hundreds of fires continue to burn across New South Wales, Queensland, South Australia and Western Australia – has added to pressure on Mr Morrison, who was widely criticised after travelling to Hawaii on holiday in December during the crisis.

During a visit to the New South Wales town of Cobargo on Thursday, where a father and son were killed by the fires, residents refused to shake the prime minister’s hand. He eventually retreated to a car after being heckled and sworn at by local residents.

“I’m only shaking your hand if you give more funding to our [rural fire service]. So many people here have lost their homes,” said one woman.

Mr Morrison has been criticised for failing to take effective action to tackle climate change and refusing to meet a group of former fire chiefs. The fire chiefs warned in April about a potential bushfire emergency, owing to the severe drought that has affected eastern Australia for more than two years.

Greg Mullins, a former New South Wales fire commissioner, told Australian radio on Friday that he was angry with Mr Morrison’s slow response to the crisis.

“It reminds me of President Trump when there’s multiple shootings saying it’s nothing to do with guns. We have to talk about climate change because our bushfire situation in Australia has changed forever,” he said.

Mr Morrison said on radio that he knew people were upset. “Whether they’re angry with me or angry with their situation, they’re hurting,” he said. “I don’t take it personally.”

Ian McAllister, professor of politics at Australian National University, said natural disasters could make or break political leaders and Mr Morrison’s response to the bushfire emergency was “not a good look”.

“He took a holiday in Hawaii, was largely invisible when he returned and has only been out and about in recent days – this will further undermine people’s trust in politics.” – Copyright The Financial Times Limited 2020