As Washington prepares for an impeachment trial, the White House is bullish on the outcome 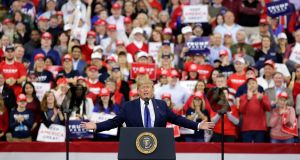 History will be made next week when the impeachment trial of Donald J Trump opens in the US Senate – only the third time in history that a sitting US president has faced removal from office.

On Tuesday, the 100 members of the Senate will begin hearing opening arguments in the case against president Trump over his dealings with Ukraine. It follows his impeachment last month by the Democratic-controlled House of Representatives.

On December 18th, the lower house of Congress voted to charge the president with two articles of impeachment – abuse of power and obstruction of congress – following weeks of private and public testimony from witnesses. The impeachment inquiry began in September after details surfaced of a phone call between the president and Ukrainian president Volodymyr Zelenskiy, during which Trump asked his Ukrainian counterpart for a “favour”.

Trump has joined an infamous coterie of presidents. But he can take some solace from historical precedent. No president has ever been removed from office

He is alleged to have pressured the Ukrainian leader to open an investigation into former vice president Joe Biden and his son Hunter, who served on the board of a Ukrainian gas company while his father was in office. Democrats believe that he demanded the investigation as a quid pro quo for releasing military aid to Ukraine.

With the House having found Trump guilty of impeachable conduct, it now falls to the Senate to decide whether to convict him.

Impeachment is a rare occurrence. When the US’s founding fathers drew up the constitution more than two centuries ago, they sought a way to remove a president if needed. Despite widespread backing for George Washington as the new republic’s first president in the late 1780s, the writers of the constitution worried about future presidents.

“The first man put at the helm will be a good one,” Benjamin Franklin said at the time. But “nobody knows . . . what sort may come afterwards.”

The framers settled on impeachment – then a familiar procedure widely used in Britain – to act as a restraint on the executive branch of government. If the House voted to impeach a president, and a two-third majority in the Senate supported it, a president could be removed from office for “treason, bribery and other high crimes and misdemeanours”.

Since then, impeachment has been invoked only a handful of times – for the first time in 1868 when Andrew Johnson was impeached, and in 1999 when Bill Clinton was. Richard Nixon resigned before an impeachment vote could be held after he lost the support of his party in Congress over the Watergate affair.

With his impeachment on December 18th, Trump has joined an infamous coterie of presidents. But he can take some solace from historical precedent. No president has ever been removed from office as a result of impeachment – both Johnson and Clinton were cleared in their Senate trials. This is likely to be repeated in Trump’s case. With Republicans holding 53 of the 100 seats in the Senate, and a two-third majority needed to convict, it is highly unlikely that enough Republicans will break ranks with their president and vote to remove him.

In terms of the structure of the trial, the process will begin with both sides setting out opening arguments. House Speaker Nancy Pelosi named seven impeachment “managers” this week – essentially the prosecution team, who will be making the case. They are likely to set out their arguments over four or five days. Representatives for the president will be given equal time to lay out their defence.

Unlike the ultimate vote on the trial itself, which needs a two-thirds majority, a vote on the rules needs only a simple majority

Though the White House has yet to confirm who will represent the president in the trial, it is expected that White House counsel Pat Cipollone, and Jay Sekulow, the president’s personal lawyer since 2017 and a familiar figure on US radio and TV, will be involved. Well-known lawyer Alan Dershowitz and Kenneth Starr, the Special Counsel during the Clinton impeachment, will also participate, it emerged yesterday. It is also possible Trump will select Republican members of the House to represent his case.

But while the structure for the next two weeks has been well flagged, a key issue ahead is the question of witnesses.

But so far McConnell has indicated he is opposed to the notion. At the very least, he has argued that a vote on witnesses should take place at a later stage – after both sides have delivered their opening statements and arguments.

Unlike the ultimate vote on the trial itself, which needs a two-thirds majority, a vote on the rules needs only a simple majority, raising the prospect that some moderate Republicans – Mitt Romney for example, or Susan Collins of Maine – could side with Democrats and demand that witnesses are called.

Pelosi has said that any move “to begin the trial without witnesses and documents” will be understood by the American people as a “pure political cover-up” and that “leader McConnell and the president are afraid of more facts coming to light”.

The White House has sent mixed messages about where it stands. Trump has suggested that he would favour witnesses to prove he has done nothing wrong, though he is said to be taking McConnell’s advice about the wisdom of having a short trial.

The issue attained renewed importance this week with the emergence of more incriminating information that has brought fresh scrutiny of Trump’s activities in Ukraine. On Tuesday, House Democrats revealed communications by Lev Parnas, an associate of Trump’s lawyer Rudy Giuliani, suggesting his involvement in the surveillance of the former US ambassador to Ukraine, Marie Yovanovitch, who was subsequently fired by Mr Trump.

Ukrainian police have opened a criminal investigation into the new information. The US government’s own watchdog also ruled on Thursday that the Trump administration broke the law by withholding military aid to Ukraine that had already been approved by Congress.

The new revelations have increased pressure on Republicans to call witnesses in the trial, or at least to demand fresh documentary evidence. Whether this new information will be enough to persuade a handful of Republican senators to break ranks with their party and vote to call witnesses remains to be seen, but will be the key question in the coming weeks.

As Washington prepares for an impeachment trial, the White House is bullish on the outcome. Senior administration officials say they expect the trial to wrap up in two weeks. The president has dismissed it as a “hoax,” but privately is said to be unhappy that his legacy may be tarnished by impeachment.

What impact it will have on Trump’s support remains to be seen. One crucial difference between the Trump impeachment and previous trials is that it is taking place 10 months before a presidential election. Both Nixon and Clinton were in their final term when they faced removal from office.

It may also influence the Democratic race for the presidential nomination. Biden has found himself at the centre of the Ukraine scandal, given that Trump has been impeached for pressuring Ukraine to investigate his political rival. Some Republicans have raised the prospect of subpoenaing the former vice president and his son Hunter to testify in the trial if Democrats demand witnesses.

The impeachment may influence the outcome of the Democratic race in other ways. Four Democratic candidates – Senators Elizabeth Warren, Bernie Sanders, Michael Bennet and Amy Klobuchar – will be compelled to attend the trial in Washington in the coming weeks at a time when they had been expected to be campaigning in Iowa ahead of the February 3rd caucus.

Their enforced absence from the campaign trail ahead of the first primary vote could benefit Biden and Indiana mayor Pete Buttigieg who are expected to double-down on their campaigning efforts in the mid-western state.

Whether the impeachment of Trump will sway voters ahead of November’s election is the key question for the president as he seeks a second term in office.

So far his supporters have mostly stuck with him, despite a raft of scandals in his first three years in the White House. Some believe the impeachment is unlikely to change many hearts or minds and could in fact motivate his supporters in the run up to the election.

Given the tight margins that delivered Trump the presidency the last time around, he will need all the votes he can get when US goes to the polls on November 3rd.