Solemn tones in US Congress as Donald Trump goes on trial

The US Senate has formally opened the impeachment trial against Donald Trump, with the US president dismissing the process as "a complete hoax." Video: Reuters 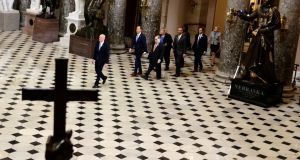 House sergeant at arms Paul Irving leads the seven impeachment managers to the Senate chamber of the US Capitol. Photograph: Alex Wong/Getty 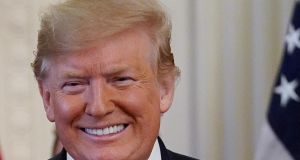 It was a historic day in Washington on Thursday as the 100 members of the US Senate were sworn in for the impeachment trial of President Donald Trump.

Shortly after midday, the seven impeachment managers appointed by House of Representatives speaker Nancy Pelosi to represent House Democrats in the trial, walked to the Senate where they read the articles of impeachment into the record.

In solemn tones, California Democrat Adam Schiff stated that Trump had abused the power of his office by withholding aid to Ukraine and demanding investigations into political rivals. He also accused the president of obstructing Congress.

“President Trump thus warrants impeachment and trial, removal from office, and disqualification to hold and enjoy any office of honour, trust, or profit under the United States, ” he said.

Two hours later the chief justice of the supreme court, John Roberts, entered the Senate. As stipulated in the constitution he will preside over the Senate trial, though his role is expected to be largely ceremonial. After taking the oath, he swore in the hundred members of the Senate, who agreed to do “impartial justice according to the constitution and laws”.

Among them were four Democratic candidates for president – Bernie Sanders, Elizabeth Warren, Amy Klobuchar and Michael Bennet – who will be compelled to attend the Senate trial over the coming weeks at a time when their rivals for the Democratic nomination for president will be campaigning in Iowa ahead of the February 3rd caucus.

Speaking on the chamber floor, Senate majority leader Mitch McConnell confirmed that the trial would begin next Tuesday at 1pm (6pm Irish time). The process will begin with opening arguments by both sides, though the White House has yet to announce who will represent Trump. The initial phase is likely to take up to two weeks. A vote may then take place on whether to subpoena witnesses and documents, though Republicans are opposed to the notion.

As the impeachment trial begins in earnest, pressure has increased on Trump in recent days.

The new documentation includes messages Parnas exchanged with a Connecticut Republican suggesting that the men were surveilling former US ambassador to Ukraine Marie Yovanovitch in Kiev, as well as a handwritten note by Parnas calling for the Ukrainian government to publicly announce an investigation into Joe Biden and his son Hunter.

In US media interviews on Wednesday, Parnas said that Trump, vice-president Mike Pence and others were aware of his efforts to encourage Ukraine to open an investigation into Biden and his son. “Everyone knew,” he said. He also said the aim of those efforts was to ensure Trump got re-elected in 2020 – not to root out corruption as Trump has consistently stated.

On Thursday, the Ukrainian authorities announced they were opening a criminal investigation into the alleged surveillance of Yovanovitch, who was removed from her post by Trump last summer. Referring to the new information regarding Parnas, Ukraine’s internal affairs ministry said the country “cannot ignore such illegal activities” on its territory.

In perhaps the most damaging blow to Trump ahead of the trial, a US government watchdog ruled on Thursday the White House broke the law by withholding military aid to Ukraine. The president’s withholding of that aid is at the centre of the impeachment charges against him.

The money was ultimately released to the country in September, after the controversy surfaced over Trump’s July 25th phone call with Ukrainian president Volodymyr Zelenskiy, in which Trump asked for an investigation into the Bidens. Joe Biden is a potential opponent of Trump in this year’s presidential election.

In an announcement on Thursday, the Government Accountability Office (GAO) said Trump and the office of management and budget had broken the law by withholding aid that had already been sanctioned by Congress.

“Faithful execution of the law does not permit the president to substitute his own policy priorities for those that Congress has enacted into law,” the decision states.

The White House dismissed the ruling, and accused the GAO of “overreach” and an attempt to insert itself into the “media’s controversy of the day”. But Democrats seized on the development as proof the Senate needs to call witnesses and demand documents during the impeachment trial.

The emergence of new evidence strengthening Democrats’ case against Trump seems to have validated Pelosi’s decision to delay the transmission of the impeachment articles to the Senate. Ultimately, however, it will now fall to the hundred members of the Senate to decide if the president has engaged in behaviour that warrants his removal from office.