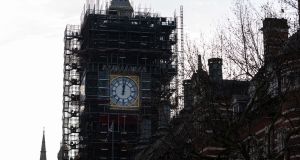 Big Ben: campaigners want its bell to chime for the first time since restoration work began in 2017 to mark Britain’s departure from the EU on January 31st. Photograph: Will Oliver/EPA

Those who wish to celebrate Britain leaving the EU will want to do so in the same manner as New Year’s Eve – by looking at a clock, the campaign’s organisers wrote online.

“The natural choice for this would be Big Ben but because it is currently undergoing refurbishment, special measures would have to be put in place, which could cost up to £500,000,” a statement by StandUp4Brexit founder Rebecca Ryan and Mark Francois MP added.

“However, because there is a lead time to make the necessary preparations, we would need to raise this amount by this weekend.”

Mr Francois had earlier accused the House of Commons authorities of exaggerating the cost of bringing the bell, which has been silent since 2017, back into operation.

In a video posted on the fundraising site, Mr Francois said he was “delighted to announce that our Eurosceptic colleagues from StandUp4Brexit have agreed to host a crowdfunding campaign to help raise half a million pounds so that Big Ben can chime at 11pm on the 31st of January”.

He added that the campaign hoped to get contributions “from across the four nations of the United Kingdom, what the prime minister likes to call the ‘awesome foursome’”.

Mr Francois said it was “inconceivable” that the clock used to mark the UK’s departure from the EU “could be any other than the most iconic timepiece on Earth, which is Big Ben”.

He finished his appeal by saying “please give an amount on this website now so we can properly celebrate becoming a free country again”.

When the fundraiser passed £100,000, Ms Ryan and Mr Francois posted a message on the site saying they “were very pleased to hear the leader of the House [of Commons]– in relation to our campaign – that parliament ‘shouldn’t look gift horses in the mouth’”.

They added that “Britons are currently donating more than £80 a minute to the campaign, with an average donation of £16”.

British prime minister Boris Johnson had said on BBC Breakfast on Tuesday that the government was “working up a plan so people can bung a bob for a Big Ben bong”.

Donations to the campaign include £1,000 from Mr Francois, while business secretary Andrea Leadsom promised £10.

There were also small donations from “Dominic Grieve”, “Jeremy Corbyn” and “John Bercow” but these were all thought likely to be fake names.

Restoring the bell was discussed at a meeting of the House of Commons Commission on Monday, but it was ruled out after it was revealed it could cost £500,000.

Commons speaker Sir Lindsay Hoyle, who is chairman of the commission, said: “You are talking about £50,000 a bong.”

Whether Big Ben bongs or not, Brexiteers intend to gather outside parliament to mark the UK’s departure from the EU.

Brexit Party leader Nigel Farage said the Leave Means Leave campaign group had been been given approval to hold an event in Parliament Square on January 31st. “It is a big moment in the history of this nation to celebrate,” he said. – PA