Keir Starmer is favourite. But many members are eager for their first woman leader 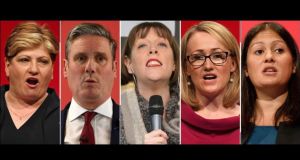 The five candidates to succeed Jeremy Corbyn as Labour leader will face off on Saturday in the first hustings of a three-month campaign that will produce a winner on April 4th. The five MPs – Keir Starmer, Rebecca Long Bailey, Lisa Nandy, Jess Phillips and Emily Thornberry – this week won the nominations of enough MPs and MEPs to get through to the second round of the three-stage contest.

The leader will be chosen by all Labour members and registered supporters but candidates must win the support of enough unions and other affiliated organisations or of constituency parties to secure a place on the ballot. They need the backing of two unions and one other affiliated organisation (such as the Fabian Society or the Jewish Labour Movement) making up at least 5 per cent of the total affiliate membership. Or they can make the cut by winning the support of 33 constituency parties, which is 5 per cent of the total.

The candidates have until February 14th to win enough support to get onto the ballot paper, which will be sent to about half a million Labour members and anyone who signed up this week as a registered supporter at a cost of £25.

The election is carried out under the “alternative vote” system, with voters ranking the candidates in order of preference. If no candidate reaches 50 per cent on the first count, lower preferences are distributed until one of them does.

Parallel to the leadership contest, Labour is also choosing a deputy leader under the same rules and procedure.

The shadow Brexit secretary won the nominations of almost half the MPs who voted in the first round of the leadership contest and is viewed at Westminster as the candidate to beat. At 57, he has been in Parliament since 2015, succeeding the late Frank Dobson as MP for the London seat of Holborn and St Pancras.

Before entering politics, he was a barrister and he served as a human rights advisor to the Northern Ireland Policing Board between 2002 and 2007. He became director of public prosecutions and head of the Crown Prosecution Service in 2008, a position he held until 2013.

Starmer backed Andy Burnham in the 2015 leadership election but Jeremy Corbyn made him a shadow home office minister. Starmer resigned along with many other shadow cabinet members after the 2016 Brexit referendum and backed Owen Smith’s unsuccessful challenge against Corbyn.

As shadow Brexit secretary, Starmer was loyal to the leadership in public, working behind the scenes to shift Corbyn and the Labour membership towards a more overtly pro-Remain position. He is presenting himself as a unity candidate in the leadership contest, calling for Corbyn’s left-wing economic policies to be retained but promising more openness and competence.

With the support of Unison, Britain’s biggest union, and of Labour’s environmental affiliate SERA, Starmer is already most of the way towards a place on the members’ ballot and remains favourite to win.

What could get in his way is that he is perceived as dull; fears that his association with Labour’s opposition to Brexit could be an impediment in the Midlands and the North of England; and the eagerness of many party members to elect their first woman leader.

The shadow business secretary is the anointed candidate of most of those around Corbyn, although the leader himself will not publicly support anyone in the contest. After a slow start, her campaign has picked up pace in the past few days and a Survation poll of Labour members this week put her ahead of Starmer.

She already has the backing of Momentum, the campaigning group founded to support Corbyn’s leadership, following a poll of its members in which hers was the only name on the ballot. Long-Bailey is also expected to win the support of Unite, the union that is Labour’s biggest paymaster, and her place on the members’ ballot is assured.

Aged 40, Long-Bailey was born in Manchester to Irish parents and worked as a solicitor before becoming MP for Salford and Eccles in 2015. An early supporter of Corbyn, she joined his front bench immediately after his election and was also appointed to the National Executive Committee (NEC), Labour’s governing body.

The backing of Momentum and Unite will help Long-Bailey steal a march on her rivals in contacting Labour members, whose contact details will not be shared with candidates until a few days before ballot papers are sent out next month. Both Momentum and Unite have extensive databases of their own, as well as the infrastructure and volunteers to make sure that her message reaches the membership early and often.

That message is one of unswerving loyalty to the Corbyn project (Long-Bailey gave his leadership 10 out of 10 in an interview last week) and to the idea of Labour as a radical, progressive party.

“The British state needs a seismic shock, to prise it open at all levels to the people – their knowledge, their skills, their demands. Proper democracy takes power away from the offshore bank account and places it on the ballot paper, so workers can have more and chief executives less, and we can tackle the climate crisis with a Green New Deal that unites all of Labour’s heartlands,” she says.

The MP for Wigan has been the breakout star of the first weeks of the campaign, grabbing attention with her analysis of Labour’s estrangement from its old industrial heartland and holding her own in a 22-minute interview with Andrew Neil on Wednesday.

At 40, Nandy has been in Parliament since 2010 and has been a backbencher since 2016 when she resigned from Corbyn’s shadow cabinet where she served as shadow energy secretary. She has won the backing of the National Union of Mineworkers (NUM) and is expected to win the support of at least one other union next week, making her place on the ballot paper almost certain.

Her father was a Marxist academic from India and her grandfather was a Liberal MP who became a peer. Before entering parliament, Nandy worked for a homelessness charity and as a policy adviser to the Children’s Commission and the Independent Asylum Commission.

Although she campaigned against Brexit in the 2016 referendum, Nandy has consistently argued that the vote should be respected. She was one of a number of Labour MPs who flirted with supporting Theresa May’s Brexit deal, negotiating with the prime minister for hours and making agonised speeches in the Commons but never actually voting for the deal.

In 2018, she set up the Centre for Towns, a think tank focused on improving life in Britain’s towns, and she argues that Labour’s route back to power runs through the places the party lost last month to the Conservatives and others it lost long before.

“The next Labour leader will have to be up for a scrap – willing to run to the places where we are loathed, take the anger on the chin, and make and win the argument,” she wrote in the Guardian.

Nandy’s best hope of winning the leadership could lie in winning enough second preferences to put her in the running if neither Starmer nor Long-Bailey wins more than 50 per cent of the votes in the first round.

The 38-year-old MP for Birmingham Yardley is one of the most high-profile backbenchers in any party at Westminster after appearances on BBC Question Time and Have I Got News for You and some highly effective and unorthodox interventions in the Commons. Phillips’s high profile has helped to make her a target for abuse on social media, including rape threats.

Before entering parliament, she worked for Women’s Aid, which supports victims of domestic abuse, and women’s rights remain at the centre of her politics. A critic of Corbyn’s leadership, Phillips has been outspoken in condemning Labour’s handling of allegations of anti-Semitism.

Her campaign slogan is “Speak Truth. Win Power”, and Phillips is presenting herself as a straight talker who does not respect the niceties of political discourse but could discombobulate Boris Johnson at the dispatch box. She will probably need the support of 33 constituency parties to get on to the ballot, and as a figure to the right of most Labour members she is a long shot to win the leadership.

Long regarded as the favourite to succeed Corbyn, the 59-year-old shadow foreign secretary scraped through the first round with the bare minimum of nominations from MPs. Thornberry nominated Corbyn for the leadership in 2015 and remained loyal to him during the shadow cabinet resignations and Owen Smith’s leadership challenge.

But some in Corbyn’s inner circle viewed her with suspicion, and she was sidelined over the past two years as she pressed the party to back calls for a second Brexit referendum. An effective performer at the dispatch box, she was last year pushed out of her role as Corbyn’s stand-in at prime minister’s questions.

MP for Islington South and Finsbury since 2005, Thornberry is the most experienced of the leadership candidates, but she cannot expect union support and may struggle to win the backing of enough constituency parties to appear on the ballot.