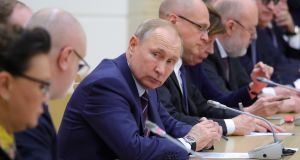 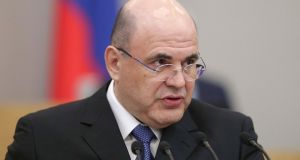 As State Duma speaker Vyacheslav Volodin gathered senior members of parliament together to discuss Vladimir Putin’s newly-announced plans to amend the constitution, the news broke that the long-serving prime minister had resigned.

Volodin, a former top Kremlin aide to Putin, had to wait while the government’s own official envoy to parliament rushed out of the room to check if it was true.

Dmitry Medvedev himself didn’t know his days as premier were numbered until as little as 72 hours before the announcement, even though his replacement, Mikhail Mishustin, had already met with the president, two people familiar with the matter said. They asked not to be identified discussing sensitive internal issues.

The lightning series of actions demonstrated that Putin retains the ability to upend Russian politics even after 20 years in power.

“There could be more surprises,” said Alexei Mukhin, head of the Moscow-based Centre for Political Information. “Putin just fired an opening shot, he only provided the broad picture.”

What seems clear, however, is that he intends to leave the presidency when his current term ends in 2024 in line with the constitution, since nothing in his proposed reforms would enable him to skirt term limits to remain in the Kremlin.

While Putin insisted Russia must remain a “strong presidential republic”, he has embarked on a programme aimed at restraining the powers of his favoured successor while creating options for himself to control political developments if he so chooses.

“We’re seeing the start of the transition but it’s not clear what the final outcome will look like under Putin’s scheme,” said Mikhail Vinogradov, head of the St Petersburg Politics Foundation.

The Russian leader’s actions have opened the way to several scenarios including Putin becoming Duma speaker, heading a beefed-up State Council or taking bigger powers with him to the Security Council, a person close to the Kremlin said.

Russia’s longest-serving leader since Soviet dictator Josef Stalin appears to be in a hurry. Putin met on Thursday with members of a new constitutional working group set up to consider the revisions. A promised public vote on the changes may be held before May 1st, the state-run Tass news service reported, citing a senior member of the upper house of parliament.

Putin (67) wants to elevate the State Council, currently an advisory body, by enshrining it formally in the constitution with clearly defined powers. That has already prompted speculation that he may use the body as a platform to exercise control over the different branches of government after 2024.

While he enjoys untrammelled presidential power, Putin proposes to bind his successor by offering members of parliament a potentially decisive say in the appointment of future premiers and cabinet ministers.He also plans to close a loophole that he himself exploited to serve four terms as president. The head of state would be limited to two terms in total instead of the present two consecutive terms, a constitutional wording that allowed Putin to return to the Kremlin in 2012 after a four-year break as prime minister.

Putin hasn’t ruled out proposing further amendments, Andrei Klishas, co-chairman of the constitutional working group, said after the meeting with the president, according to Tass.

In this fast-moving environment, Putin may even use the opportunity to call early parliamentary and presidential elections, said one person close to the ruling United Russia party. Volodin, the speaker of the lower house of parliament, dismissed that as unrealistic.

Putin has given no clue on why he’s making the barrage of changes now, but insiders said he may be seeking to get the reforms completed before parliamentary elections next year.

The biggest unanswered question remains the identity of the person Putin taps to replace him as president at the 2024 elections. “We don’t know if the new prime minister is a successor or if the question will be put off,” said Vinogradov.

Mishustin, the technocratic former tax chief, immediately becomes a contender as premier and would succeed formally to the presidency under the constitution should anything happen to Putin. The Duma’s confirmation vote on his appointment was the first since 1996 that didn’t have a single lawmaker voting against, according to Volodin.

Mishustin has won plaudits for taming legendary Russian tax evasion by installing a nationwide computerised reporting system that works in real time, producing an influx of additional revenues. He told parliamenary deputies that his key tasks will be to speed up Putin’s National Projects infrastructure-spending program and to rebuild “trust” with business.

He’ll be judged on whether he succeeds in reviving the sluggish economy and raising living standards that have fallen for five years in Russia. For the moment, at least, Mishustin looks like a temporary figure at the top of Russian politics like other predecessors with the exception of Putin, two people close to the Kremlin said.

That could change if he performs well, according to one of them. Other contenders could appear who may be younger and closer to the security services where Putin made his career, according to Olga Kryshtanovskaya, who studies the Russian elite at the State University of Management in Moscow. These include a crop of regional governors who have risen through the ranks, she said.

Still, “it could be very hard, if not impossible” for Putin to control the new head of state, said Kryshtanovskaya. – Bloomberg