US House votes to send Trump impeachment charges to Senate 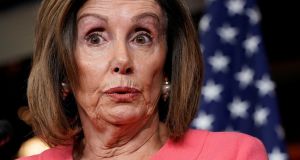 The US House of Representatives voted to send articles of impeachment against President Donald Trump to the Senate on Wednesday, paving the way for only the third presidential impeachment trial in US history.

House majority leader Mitch McConnell has indicated that the trial will begin next Tuesday, when both sides are expected to set out opening arguments for and against the removal of Mr Trump from office. It follows a decision by the Democratic-controlled House to impeach the president over his dealings with Ukraine on December 18th.

In a historic vote in the House of Representatives on Wednesday afternoon, the 435-member chamber approved a resolution to transmit the articles of impeachment to the Senate. It was approved by 228 to 193, broadly on party lines.

The House also approved seven impeachment “managers” – members of the House who will effectively act as prosecutors in the trial. These include Adam Schiff, the chairman of the House intelligence committee, and Jerry Nadler, head of the judiciary committee. Five other members were also named, most of whom have legal backgrounds.

Following the vote, House speaker Nancy Pelosi was expected to preside over an “engrossment” ceremony – largely a ceremonial process which will see the impeachment managers proceed across the Capitol building to the Senate where they will present the articles of impeachment to the secretary of the Senate.

It is expected that the impeachment managers will read aloud the articles of impeachment against Mr Trump on Thursday. Chief justice John Roberts – who, according to the constitution, will preside over the trial – will also enter the Senate and administer an oath to all 100 senators.

Speaking at a ceremony in the White House to mark the signing of a partial trade agreement with China as the House was voting on the impeachment articles, Mr Trump dismissed the process as a “hoax”.

Earlier in the day, at a press conference where she unveiled the impeachment managers, Ms Pelosi said that the constitution of the United States was at stake.

“This is what impeachment is about. The president violated his oath of office, undermined our national security, jeopardised the integrity of our elections, tried to use the appropriations process as his private ATM machine.”

Mr Schiff, who will play a leading role in the trial, defended the Democrats’ decision to delay sending the articles of impeachment to the Senate by almost a month, arguing that new evidence had been brought to light in the intervening period, while it also forced senators “to go on record”.

“Do they want a fair trial that’s fair to the president and to the American people. Or are they going to participate in a cover-up?” he said.

Mr Schiff was referring to new information released by House Democrats on the eve of the vote related to Lev Parnas, an associate of Mr Trump’s personal lawyer, Rudy Giuliani.

They presented further evidence of the president and his surrogates pressuring Ukraine to investigate the president’s political rival, Joe Biden, including handwritten notes by Mr Parnas.

They also revealed messages between Mr Parnas, who is now in custody, and Robert Hyde, a Republican candidate in Connecticut which suggest that the men were tracking former US ambassador to Ukraine Marie Yovanovitch, who was ultimately fired by Mr Trump.

As Washington prepares for an impeachment trial, the White House indicated it will take a bullish approach, though it has not yet announced who will be representing the president in the Senate.

Senior administration officials said they expect the trial to wrap up within two weeks, though Democrats are arguing that witnesses should be called and documents subpoenaed – a process that would significantly extend that timescale.

Minister for Children condemns ‘far right’ attacks on his character

1 Minister for Children condemns ‘far right’ attacks on his character
2 ‘We are worried’: Taoiseach warns plan to reopen all pubs on July 20th may be delayed
3 Leaving Cert student told he is not eligible for predicted grade
4 Covid-19: Tragedy of ‘terrible dimensions’ as woman loses husband and son
5 Call for inquiry into death of Meath nursing home resident
Real news has value SUBSCRIBE