Libya violence: When a phone is the difference between life and death 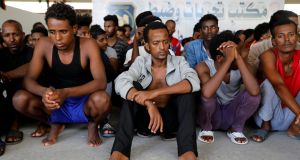 Migrants in a shelter who were relocated from government-run detention centres after being trapped by clashes between rival groups in Tripoli, Libya. Photograph: Hani Amara/Reuters

For refugees and migrants in Libyan detention centres, a phone marks the difference between life and death. They’re carefully hidden, topped up by contacts in other parts of Libya, and charged in secret, wherever electricity can be found.

At no time has this been more obvious than since fighting broke out 10 days ago.

As a state of emergency continues in Tripoli, and fighting escalates quickly, thousands of migrants and refugees previously held in detention centres have been scattered across the city, all desperate to stay alive.

The Irish Times is in touch with at least five groups, who have used smartphones to message about everything from a lack of food, to looters, bomb blasts and attacks by armed men, to how they feel they’ve been abandoned by the United Nations and other international organisations.

Since fighting erupted on August 26th, between rival armed militias vying for control of Tripoli, many of the estimated 8,000 refugees and migrants in official detention centres have been “released”, moved to different locations, or have escaped and are now sleeping on the streets.

Many were never registered by the UN – despite regularly asking for it – and detention centre managers say they have no lists of who exactly was in their centres. This means it is impossible to know the number that have already disappeared.

Some aid workers suggest detention centres obscure this information deliberately. Migrants and refugees have been known to pay their way out (the going rate is $20,000 [€17,000]said one Eritrean) or they’ve been sold to traffickers or to rich Libyans as slaves. A migrant can be sold as forced labour for as much as $600, said a Libyan aid worker. Now the fighting is fierce, consequences can prove deadly.

#Libya, the appearance of stabilisation for 18 months was just deceptive & based on wrong assumptions. Now refugees need to be evacuated if we want to save lives. All goodwills are needed. https://t.co/CJmFSiTMAy

Most of the migrants and refugees in Tripoli’s detention centres were returned to Libya by the EU-backed Libyan coast guard. But this service is widely believed to work with smugglers and has intercepted tens of thousands of people trying to escape the country since it signed a deal with Italy in February 2017.

All of those sent back are locked up in indefinite detention. “In all facilities, detention conditions reportedly fail to meet international standards and have been described as ‘appalling’, ‘nightmarish’, ‘cruel, inhuman and degrading,’ ” said the United Nations Refugee Agency (UNHCR) on Monday.

The agency added that Libya is no longer a safe country to which migrants and refugees can returned. This is a significant development from an organisation that has been hesitant to criticise EU policy.

“The appearance of stabilisation for 18 months was just deceptive and based on wrong assumptions,” tweeted Vincent Cochetel, special envoy for the central Mediterranean situation. “Now refugees need to be evacuated if we want to save lives.”

Sources in the European Parliament said the agency is negotiating to evacuate 2,000 refugees to Niger. But refugees trapped Tripoli fighting worry they will be left behind, saying this figure just isn’t enough and that UNHCR will certainly prioritise those they have registered.

Meanwhile, caught between warring sides, with little support and no idea who to trust, they struggle to stay alive long enough to see whether evacuations will happen.

One refugee messaged to say he is trapped in a building with hundreds of others. Six people in the group have died of starvation or a lack of water since last week. He said the group is being forced to package bullets and he suspects they’re being held by a militia, after being moved from an official detention centre last week.

“Will the UN and the European Union help us? Or are they going to leave us to die in Libya?” he asked in a message. “All of us are saying like that. Right now there are gun shots, we are listening. Yesterday night there were gun shots until morning, and the guards left us, but then came back.”

Another man said he was sleeping on the streets with a group of more than 100 migrants. They camped outside the offices of UNHCR for five nights in the hope they would be helped, but no one turned up.

A Nigerian man, who is trying to flee the city and make it to the city of Sabha, said he’s desperate to go home and deeply regrets selling all his belongings to make this journey. “When the fighting became intense the guards had no choice but to let us go. I think some migrants were actually killed. Some fled directly into the fighting. Most of us don’t know the cities well.”

He said it was “everyone for himself . . . Everyone was running for their lives, even the Libyans.”

Meanwhile, a group of about 400 that were widely reported to have been “moved out of harm’s way” last week were abandoned again for two days on their own, smoke rising from buildings all around them.

“We don’t have food or water to drink, our children are crying for food,” said a young mother in a voice message. “We are asking for food. Please help us. There are 120 women, 20 children and eight pregnant women. The guards for this camp have run away. We are open to be killed.”