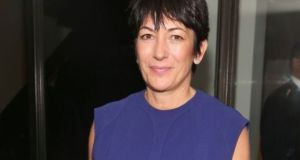 Ghislaine Maxwell was arrested earlier this month and charged over her alleged involvement with Jeffery Epstein’s sex trafficking of minors. Photograph: Sylvain Gaboury/Patrick McMullan via Getty

An extensive collection of “extremely personal” documents in civil litigation against British socialite Ghislaine Maxwell can be unsealed, a Manhattan federal court judge ruled in the US on Thursday.

The documents relate to Ms Maxwell’s deposition in this litigation, as well as her early 2015 correspondence with her longterm associate, the disgraced financier Jeffrey Epstein.

Ms Maxwell was arrested earlier this month and charged over her alleged involvement with Epstein’s sex trafficking of minors. Ms Maxwell pleaded not guilty on July 14th and remains in jail while awaiting trial.

In the civil lawsuits, Ms Maxwell’s lawyers had pushed to keep these records secret, claiming previously “this series of pleadings concerns [attempts] to compel Ms Maxwell to answer intrusive questions about her sex life” that are “extremely personal, confidential and subject to considerable abuse by the media”.

The Manhattan federal court judge ruled on Thursday that they could be unsealed, though Ms Maxwell’s attorneys plan to appeal the decision.

“The court finds that the countervailing interests identified fail to rebut the presumption of public access,” judge Loretta Preska said during a telephone proceeding. “Accordingly, those papers shall be unsealed.”

The decision over these records stems from Epstein accuser Virginia Giuffre’s 2015 civil lawsuit against Ms Maxwell. Ms Giuffre has alleged that Ms Maxwell recruited her to work as Epstein’s masseuse at 15 years old, when she worked as a locker-room attendant in Donald Trump’s Mar-a-Lago club in south Florida.

In this litigation, which has been settled, Ms Giuffre alleged Ms Maxwell had defamed her by saying that she was a liar in accusing Epstein and Ms Maxwell of sexual misconduct.

Following Judge Preska’s decision, one of Ms Maxwell’s attorneys asked for two weeks to appeal this decision, given the new criminal case.

Judge Preska said Ms Maxwell’s team had one week to file the appeal motion, and asked to be informed if the appeals court didn’t rule within one week. She asked the attorneys to nonetheless continue working on preparing these papers for the release in the interim.

A large tranche of documents in this lawsuit was also released last August; they contained both sensational claims and denials that world leaders were involved in Epstein’s sex trafficking.

They were released shortly after Epstein’s arrest last July for sex trafficking. Epstein killed himself in prison in August.–Guardian