Covid-19: Boris Johnson to aim for testing capacity of half a million a day 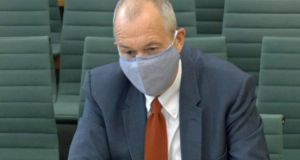 Sir Patrick Vallance, the British government’s chief scientific adviser: ‘It’s clear that the outcome has not been good in the UK, I think you can be absolutely clear about that.’ Photograph: House of Commons/PA Wire

British prime minister Boris Johnson will promise on Friday to increase coronavirus testing capacity to half a million a day and provide an extra £3 billion to strengthen the National Health Service (NHS) ahead of the winter. The pledge of extra resources comes after chief medical officer Patrick Vallance admitted to MPs that Britain’s coronavirus outcome has not been a good one.

“It’s clear that the outcome has not been good in the UK, I think you can be absolutely clear about that. There are many factors that are going to play in this as we look and say, ‘what is it that makes some countries having done worse than others?’, and there will be decisions made that will turn out not to have been the right decisions at the time,” he told the Commons science committee.

“It would have been absolutely preferable to have had much greater testing capacity earlier on, but it’s not just testing, it’s basic information flows around patients in hospital, rates of admission, rates of movement.”

Sir Patrick said he thought it was “quite probable” that the virus would come back in different waves over a number of years. He also appeared to contradict the prime minister, who has been encouraging people to return to their workplaces, by saying there was no reason to change the current advice.

“Of the various distancing measures, working from home for many companies remains a perfectly good option because it’s easy to do,” he said.

“I think a number of companies think it’s actually not detrimental to productivity. And in that situation, there’s absolutely no reason I can see to change it.”

Mr Johnson will publish the latest steps in his government’s coronavirus recovery roadmap at a press conference in Downing Street on Friday amid speculation that the advice on working from home could change. Ministers have become increasingly concerned about the impact of working from home on parts of the economy that depend on commuters and office workers.

The prime minister will announce a package of measures to prepare the NHS to cope with the risk of a second peak of coronavirus in the winter and relieve pressures on emergency care.

“Thanks to the hard work and sacrifices of the British people, the virus is under control and we have eased restrictions in a cautious, phased way. But the prime minister is clear that now is not the time for complacency, and we must make sure our NHS is battle-ready for winter. Tomorrow [Friday] he will set out a broad package of measures to protect against both a possible second wave, and to ease winter pressures and keep the public safe,” Mr Johnson’s official spokesman said.

Health secretary Matt Hancock announced on Thursday that Leicester’s schools and shops can reopen on July 24th, but other lockdown restrictions would remain in place. The city returned to lockdown after a surge in infections and, although the number of cases is falling, the infection rate remains high, with 119 cases per 100,000 people.

1 Prepare for six to nine months of Covid-19 restraints, warn health officials
2 Speed and distance of Covid-19 droplets tracked by Mater researchers
3 Covid-19: Seventy cases in Cork traced to local pubs and restaurants in recent weeks
4 Government own goals are gifting the initiative to Sinn Féin
5 No joy for consumer with a faulty Husqvana chainsaw
Real news has value SUBSCRIBE