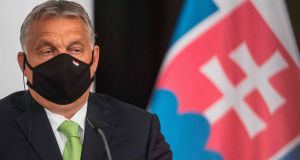 The member states of the European Union face an uphill battle to reach agreement on a common budget and recovery fund this weekend in the first physical meeting of national leaders since the outbreak of the Covid-19 pandemic.

Marathon talks kick off on Friday morning to try to break deadlock between member states on the proposals.

Officials – who will be wearing face masks and kept distant from each other during the talks – are braced for the negotiations to run through the night.

Many EU leaders are determined to reach a deal by Sunday, insisting that it’s essential for agreement to be reached to demonstrate the capability of the bloc to act in moments of crisis, both to citizens and to financial markets.

“It’s a crucial moment. It’s crunch time,” one diplomat said. “We very strongly want to come to a conclusion. It’s an important sign.”

But efforts to reach a deal may founder on the objections of two holdout states, the Netherlands and Hungary, who are both threatening to torpedo the agreement unless they get what they want – with demands that are in direct contradiction to each other.

The Netherlands views the proposed jointly guaranteed borrowing of €750 billion by the European Commission that would fund the recovery plan as tantamount to the Dutch state taking on debt, and therefore argues that its parliament must be given a say over what funds are given out to member states, as well as that the amount of money on offer should be cut.

The Hague is arguing for tough oversight over how the money is spent, including guarantees that recipient states are not flouting EU norms on the rule of law.

Hungary, where right-wing nationalist leader Victor Orban has accrued unprecedented powers and has cracked down on media, judicial and civil society freedoms since winning election a decade ago, has in turn threatened to veto the deal if money is tied to requirements to respect rule of law.

Mr Orban’s Fidesz party, which dominates the Hungarian parliament, passed a resolution demanding an end to Article 7 sanctions by the European Commission in response to democratic backsliding as a condition for supporting the budget and recovery fund.

“We could veto, because it needs to be a unanimous decision, but we would find ourselves facing off with 26 other countries. One should only do that as a last resort,” Mr Orban told Hungarian public radio ahead of the summit.

Dutch prime minister Mark Rutte also has strong domestic support for his opposition to the plan, as The Hague parliament has voiced majority opposition to jointly guaranteed borrowing, which is seen as a burden on Dutch taxpayers.

“Subsidies should come with very strict conditions, that is the only way,” Mr Rutte told the Dutch lawmakers ahead of the summit. “I would not be able to explain how we can give grants without promises of serious reforms and ways to make sure they actually happen. But I don’t feel that this idea will be accepted.”

In the talks, Ireland will argue for the maintenance of EU farming subsidies at their current level, and against a proposal by the European Commission to lower the proportion of customs duties levied by member states that national governments are allowed to keep.

Irish officials are keen to lock down political agreement on a proposed €5 billion “Brexit reserve fund”, which would support sectors and member states that are hard hit by change in EU trading terms with Britain at the end of the year.

The Brexit fund was set out as part of a compromise plan last week after intensifying rounds of talks between EU capitals to try to find common ground.

The compromise deal also tweaked the method of doling out recovery funds initially proposed following objections by Ireland and other member states who had been in for a small slice of the support.

“If I am to be honest we are not there yet,” an official said during a break from an intense schedule of preparatory meetings as national leaders began arriving in Brussels. “An agreement is not guaranteed. On the contrary there are still important differences, bridges to be built.”