German court convicts man (97) for Nazi crimes as a teen 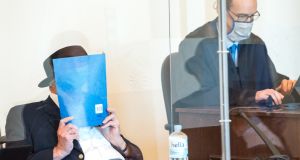 Some 75 years after the collapse of the Nazi regime, a Hamburg court has found a 93-year-old man guilty of complicity to murder for serving as a teenage concentration camp guard.

The man, identified only as Bruno D, served as a 17-year-old in the Stutthof camp near Danzig, today Gdansk in Poland. On Thursday he was handed a two-year suspended sentence for his role in 5,232 deaths.

Judge Anne Meier-Göring said, as a young man, the defendant had helped to “dehumanise human beings and turn them into numbers”.

During the 44-day case, the accused described Stutthof as a “crazy hell”. The trained baker remembered seeing dead and emaciated bodies but said he could not remember the circumstances of the killing.

In her 90-minute summation, Judge Meier-Göring said it was impossible to know how anyone would react in similar circumstances. But claims of ignorance or of an obligation to follow orders were not acceptable in the case of murder, she said, on which Germany has no statute of limitations.

“You continue to see yourself as an observer to this crazy hell,” she said. “But you were an assistant to this hell.”

In a statement to the court, the man, who uses a wheelchair, said he was “shaken” by witness testimony on the “extent of the atrocities” carried out there. “I would like to apologise to those who went through the hell of this madness, as well as to their relatives,” the man said. “Something like this must never happen again.”

Stefan Waterkamp, his defence lawyer, argued that as a 17-year-old he saw “no escape” from the Nazi killing machine and could not have been expected to break rank.

At least 65,000 people were gassed, shot, hanged or died from hunger and disease in the Stutthof camp, more than 5,000 during the man’s time there from August 1944 to April 1945 as an armed guard in a camp tower.

“The accused was no little cog, he was a person ... involved in mass murder of people,” said Judge Meier-Göring. “You looked on at death and guarded it.”

Awarding the man costs and imposing a two-year suspended sentence, one year below the prosecutor’s recommendation, the judge said the trial was less about pointing the finger at an individual, but at the society responsible for injustice.

Thursday’s ruling was made under juvenile law and is likely to be one of the last such war criminal trials. Until a decade ago, cases were only brought against Nazis who could be directly linked to killings and war crimes. A new generation of lawyers and judges have taken a broader view, however, that presence at a camp creates complicity.

This new legal framing has triggered a final legal push and ended postwar decades where such trials went into abeyance and countless senior Nazis went unpunished. The accused was interviewed once already in 1982, she noted, but no charges were brought.

This justice delayed or denied, Judge Meier-Göring said in her ruling, had made Germany “guilty once more”.