China orders closure of US consulate in Chengdu as relations deteriorate 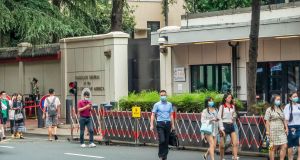 People walk in front of the US consulate in Chengdu, Sichuan province, on Thursday. Photograph: STR China Out/EPA

China ordered the United States to close its consulate in the city of Chengdu on Friday, in a tit-for-tat response to being told to shut its consulate in Houston earlier this week, as relations between the two world powers deteriorated further.

China had warned it would retaliate after it was unexpectedly given 72 hours - until Friday - to vacate its Houston consulate, and had urged Washington to reconsider.

“The US move seriously breached international law, the basic norms of international relations, and the terms of the China-US Consular Convention. It gravely harmed China-US relations,” China’s foreign ministry said in a statement.

“The ministry of foreign affairs of China informed the US embassy in China of its decision to withdraw its consent for the establishment and operation of the US consulate general in Chengdu,” it said.

Previous moves by the two sides have included visa restrictions, new travel rules for diplomats and the expulsion of foreign correspondents. By shutting down diplomatic missions, however, the two countries seem to be moving inexorably toward a deeper divide.

The announcement by the ministry of foreign affairs in Beijing came hours after US secretary of state Mike Pompeo delivered a speech summarising the Trump administration’s increasingly aggressive stance toward China on virtually every aspect of the relationship from trade to technology.

“We must admit a hard truth that should guide us in the years and decades to come, that if we want to have a free 21st century, and not the Chinese century of which Xi Jinping dreams, the old paradigm of blind engagement with China simply won’t get it done,” Mr Pompeo said Thursday. “We must not continue it and we must not return to it.”

He spoke in California at the library of president Richard Nixon, whose visit to China in 1972 set in motion a new era of relations that, he said, China exploited to the disadvantage of the United States. His reference to the closing of the consulate in Houston was met with a round of applause.

Chinese officials have reacted angrily to the administration’s moves, accusing Mr Pompeo and others of embracing a Cold War mentality. They have denied or downplayed many of the accusations, including that the consulate in Houston was a hub of illegal activity.

Beijing’s order to close the US Consulate in Chengdu, the westernmost of the five American consulates in mainland China, deprives the United States of its most valuable diplomatic outpost for gathering information on Xinjiang and Tibet, the two sometimes-restive regions in China’s far west.

Both regions have been the locations for wide-ranging security crackdowns that have drawn international criticism for abuses of human rights. Chinese officials insist that they have respected international norms. In a tweet Friday, Hua Chunying, a foreign ministry spokeswoman, strongly criticised Mr Pompeo’s remarks. The secretary of state is “launching a new crusade against China in a globalised world,” she wrote. “What he is doing is as futile as an ant trying to shake a tree.”

Administration officials this week accused Chinese diplomats in Houston of aiding economic espionage and the attempted theft of scientific research in numerous cases across the United States. Intelligence operatives from all countries operate out of their embassies and consulates, but with its actions, the administration is accusing the Chinese of going too far, violating US law by lying about their identities in order to operate undercover.

A summary of law-enforcement activities against the Chinese in the United States, provided by officials in Washington to The New York Times, depicted a web of covert activities by the consulate to recruit researchers and others to collect technology and research, including at several of the top medical centres in the Houston region.

It also detailed a series of FBI investigations across the country, disclosing that the bureau had conducted interrogations in 25 states of people thought to be members of China’s military, the People’s Liberation Army, sent to study or conduct research at universities without disclosing their affiliation.

The document said four of them had been charged and three arrested. One, identified as Tang Juan, studied at the University of California, Davis, and fled to the Chinese Consulate in San Francisco to escape arrest, according to the document. That has created yet another diplomatic crisis to untangle.

China’s decision was expected. China had warned earlier in the week that it would retaliate in kind. At the same time, the government appears to have little appetite for an escalation. The immediate effect of closing the two consulates is expected to be minimal in the short term, especially since the visas they normally process have become moot at a time when travel has been severely limited by the coronavirus pandemic.

One difficulty for China in closing US consulates is that they are needed by many Chinese families. US consulates in China issued 1.26 million visas in the past fiscal year. The city of Chengdu, in Sichuan province, has also emerged as a hub for China’s expansion across the vast deserts and steppes of Central Asia, through the Belt and Road Initiative begun by China’s top leader, Xi Jinping. Freight trains from Chengdu have carried consumer electronics and other freight across Asia and Eastern Europe to markets in Western Europe for seven years.–New York Times and Reuters