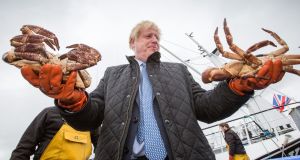 Britain’s refusal to compromise on fisheries and level playing field guarantees of fair competition have made a trade agreement unlikely, the EU’s chief Brexit negotiator said on Thursday.

Speaking at the end of a round of talks in London, Mr Barnier said that although there was some progress in certain areas there was none on the key issue of a level playing field on state aid.

“By its current refusal to commit to conditions of open and fair competition and to a balanced agreement on fisheries, the UK makes a trade agreement, at this point, unlikely,” he said.

Britain’s chief negotiator David Frost blamed the EU, asserting that its proposals did not respect the red lines Boris Johnson identified in a meeting with the presidents of the EU institutions last month.

“Considerable gaps remain in the most difficult areas, that is, the so-called level playing field and on fisheries. We have always been clear that our principles in these areas are not simple negotiating positions but expressions of the reality that we will be a fully independent country at the end of the transition period,” he said.

Mr Frost said the EU had listened to Britain’s concerns about the role of the European Court of Justice in any future agreement and Britain has dropped its demand for a complex suite of separate agreements like those the EU has with Switzerland.

However, the issue of state aid remains a stumbling block, and Mr Barnier complained on Thursday that Britain had not yet published details of the state aid regime it plans to introduce from January next year.

“We have no visibility on the UK’s intention on its future domestic subsidy control regime. We respect the UK political debate but the time for answers is quickly running out,” he said.

A senior British official close to the talks dismissed Mr Barnier’s demand for details of the state aid regime, and said Britain would not commit to any regime as part of its treaty with the EU.

“We’re a bit puzzled by this, to be honest, because we don’t quite see why. What is significant about the subsidy regime compared to lots of other areas of domestic policy?

“They aren’t asking us to pre-publish in these areas or to kind of pre-commit to future agreements forever in the treaty. And we don’t really see why this is the case either in this area. All we need is a mechanism to resolve disputes between you if there are felt to be unfair subsidies,” the official said.

“We’re not going to pre-commit to a particular kind of regime in the treaty with the EU. That’s just not how we’re going to do things.”

During a visit to Scotland on Thursday, Mr Johnson was met by protesters calling for a second referendum on Scottish independence. During a visit to Orkney and the north of Scotland, the prime minister said the response to the coronavirus had shown the strength of the union.

However, Scotland’s first minister Nicola Sturgeon , who has won praise for her handling of the pandemic, said Mr Johnson should not be exploiting it to make a political point.

“I don’t think any of us should be championing or celebrating a pandemic that has taken thousands of lives as some example of the pre-existing political case we want to make. This has been a heart-breaking crisis that we’re not out of yet. Too many people died,” she said.