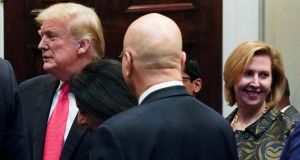 The future of several senior Trump administration officials remains in doubt after the office of the first lady said that the deputy national security adviser should no longer serve in the White House.

In a highly unusual move, a spokeswoman for Melania Trump confirmed rumours of tensions between Ms Trump and Mira Ricardel, the deputy national security adviser and second-in-command to John Bolton.

“It is the position of the office of the first lady that she no longer deserves the honour of serving in this White House,” a spokeswoman for Ms Trump said of Ms Ricardel. It follows reports that members of the national security council team and the first lady’s office clashed during Ms Trump’s visit to Africa last month.

The intervention has sparked expectations that Ms Ricardel will be dismissed imminently, despite the fact that she is closely aligned with Mr Bolton.

The development emerged amid a swirl of rumours about the future of other senior members of Mr Trump’s staff, including chief of staff John Kelly and homeland security chief Kirstjen Nielsen.

Mr Trump is said to be considering firing Ms Nielsen, who has been the face of the administration’s hardline approach to the migration issue. Ms Nielsen is a close ally of Mr Kelly, whom she replaced as secretary of homeland security last year when Mr Trump appointed him as chief of staff.

Nick Ayers, the 36-year-old chief of staff to vice-president Mike Pence, has been tipped to succeed Mr Kelly if he is forced to exit the White House.

While a change in personnel at the White House is common after midterm elections, Mr Trump’s decision to fire Jeff Sessions so soon after last week’s elections took many by surprise.

As speculation about Ms Nielsen’s future swirled on Wednesday, the homeland security chief accompanied defence secretary Jim Mattis as he visited US troops stationed at the US-Mexico border. Mr Trump has deployed troops to the region in anticipation of the arrival of migrants to the border who are currently making their way through Mexico.

Speaking at the border, Mr Mattis said he does not expect military personnel to have direct contact with the arriving migrants, but he said that the decision to deploy the troops was legal and justified.

His comments came as a group of migrants reached Tijuana, just south of the Mexico border.

But outgoing Republican senator Jeff Flake called the troop deployment a “stunt”. “I think it’s unfortunate that we have the soldiers [deployed to the border],” Mr Flake told MSNBC. “You can’t call it anything but a stunt here, and it’s unfortunate that they’re going to be away from family during the holidays coming up, and we just don’t know what really for.”

Meanwhile, amid continuing questions from Democrats about Mr Trump’s decision to replace Mr Sessions with Matthew Whitaker, the department of justice issued a 20-page memo defending Mr Whitaker’s appointment as within the law.

The memo from the justice department’s office of legal counsel, said his appointment is expressly authorised by a 1998 Act. It also stated that the White House had sought and received confirmation of the legality of the appointment before Mr Sessions stood down.

The publication of the justice department memo comes a day after the attorney general of Maryland asked a judge to block Mr Whitaker from assuming the role of acting attorney general.

Mr Whitaker’s appointment as the nation’s top law enforcement official, who will have ultimate control over the ongoing special counsel investigation into Russia interference in the 2016 election, has prompted outrage from Democrats, who have pointed out that Mr Whitaker has not been confirmed by the Senate.

Several senior Democrats, who are poised to take control of key committees in the House of Representatives in January, have opened an investigation into Mr Whitaker’s involvement with a patent firm in Florida that was charged last year with defrauding customers.

1 Donald Trump is in trouble, and that could spell very bad news
2 House parties are being held ‘with abandon’, Holohan warns
3 O’Doherty and Waters ordered to pay legal costs of case against State over Covid-19 laws
4 Trump under fire from US military after troops threat
5 Harris rules out early opening of hotels amid easing of lockdown
Real news has value SUBSCRIBE