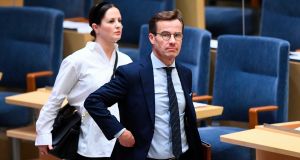 Ulf Kristersson of the Moderate Party was voted down by a parliamentary majority on Wednesday, a first in modern Swedish politics.

Among those who declined to support his candidacy were two smaller parties in his centre-right “alliance” on which Mr Kristersson was counting to support him in office.

The Liberal and Centre Party refused to back Mr Kristersson because he was to be supported in Tuesday’s vote by the far-right Sweden Democrats (SD). In the end, liberal and centre MPs joined with the outgoing government politicians from the Social Democrats and Greens, as well as the Left Party, in rejecting Mr Kristersson by 195 votes to 154.

Liberal leader Jan Björklund said his party had voted against its traditional political ally with a “heavy” heart.

“But today’s vote is about something bigger,” he said, calling the vote a protest against a “rising tide of right-wing nationalism ... which is a counter-reaction to globalisation, European co-operation, free trade, openness: liberal ideas that have built our entire successful western model of society”.

Meanwhile, Centre Party leader Annie Lööf has, before and since the September 9th vote, said her party will not join or support a minority government that is effectively dependent on the SD to legislate.

The Social Democrats and their allies, the Left and the Greens, have 144 seats in parliament, while the centre-right Alliance group has 143. The far-right SD has 62, after gaining 4.7 percentage points to win 17.5 per cent of the national vote.

Given the SD holds the balance of power, it remains unclear what will happen now in Sweden.

After two months of talks to break the political deadlock, Riksdag speaker Andreas Norlén proposed Mr Kristersson as prime minister candidate. But, as expected, MPs rejected the speaker’s candidate for the first time under the modern parliamentary system, which dates from 1971.

After Wednesday’s vote, Mr Norlén said he would meet party leaders for another round of talks before announcing the next steps. He has another three attempts to nominate a candidate for prime minister before a snap election is triggered.

Most of Sweden’s mainstream politicians are in agreement at wanting to shun the populist SD. But the prospect of power has seen resolve weaken in Mr Kristersson’s Centre Party and one smaller ally. This disagreement means the future of the centre-right alliance is in doubt, as is their ability to present an alternative centre-right administration.

The Moderate party has already rejected the other alternative: a grand coalition proposed by the last Social Democrat prime minister Stefan Löfven.

Both Moderates and Social Democrats, having lost support in September’s poll, are wary – to different degrees – of working with the opposite bloc.

However, they are even warier of fresh elections and the risk of a further electoral boost for the SD. As one seasoned political observer in Stockholm said this week: “Now it is about who blinks first.”