Demand to rename Agra, the city of the 17th-century Taj Mahal, is most curious 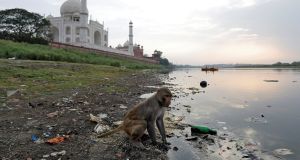 A monkey on the banks of the Yamuna river, next to the Taj Mahal in Agra, India. Photograph: Saumya Khandelwal/Reuters

Indian prime minister Narendra Modi’s Hindu nationalist Bharatiya Janata Party is on a name-changing spree across northern Uttar Pradesh state, but only of towns and places with a Muslim association.

The state’s BJP government recently renamed Allahabad, one of Uttar Pradesh’s larger cities, which was named by India’s Mughal rulers in the 17th century.

Located on the banks of the holy Ganges river, the city will now be known as Prayagraj, which according to folklore is the spot where the four-faced Hindu creator god Brahma offered his first sacrifice after making the world.

The nearby Mughalserai (Mughal Hostelry) railway station, one of north India’s busiest, has been named after Deendyal Upadhya, an associate of the ultra-Hindu right-wing Rashtriya Swayamsevak Sangh (RSS) or National Volunteer Corps, which provides spiritual guidance to the BJP.

The fundamental role of the 93-year-old corps is to keep Hinduism “pure” from outside influences such as Islam and Christianity, a goal the BJP has been avidly pursuing after assuming federal power in 2014.

The RSS, which Mr Modi joined as a novitiate, has been proscribed twice since India’s independence in 1947 for its extremist beliefs. Mahatma Gandhi’s assassin subscribed to RSS tenets, murdering him for his secular approach towards India’s Muslims.

Meanwhile, Faizabad, 160km north of Allahabad, the seat of former regional Nawabs or Muslim chieftains since the 18th century, is now known as Ayodhya, a name associated with the birthplace of Rama, another Hindu god.

But the demand from BJP legislator JP Garg to rename Agra, the city of the 17th-century Taj Mahal, is more curious.

He wants the city, 230km southeast of New Delhi, to be named Agar-Van, meaning “city of forests”, or Agar-Wal after India’s trader community of the same name.

“Agra has no meaning,” Mr Garg said, adding that there had once been forests in the area and people from the Agarwal community lived here, but provided no supporting evidence to back his claim.

Several historians said no such proof exists, and critics believe Agra’s name change is being mooted by the BJP simply because the city was the Mughal capital for 92 years until 1648.

But BJP lawmaker Sangeet Som, who is demanding the renaming of Muzaffarnagar, a small town 315km north of Agra, founded in the 17th century by a Mughal nobleman, is possibly the most forthright about his party’s motives in this regard.

Aiming to change the name of Muzaffarnagar to Laxmi Nagar, after the Hindu goddess of wealth, Som said that by renaming cities the BJP was only trying to “retain and safeguard” Hindutva or Hindu hegemony destroyed by Muslim rulers.

Opposition parties have responded by accusing the BJP and the RSS of rewriting history in an attempt to extend their cultural influence.

They also said that by resorting to changing city names, the party was deflecting attention from its inability to kickstart the flagging economy, create jobs and improve civic amenities such as roads, sewage and sanitation.

“The BJP is busy doing things which have nothing to do with progress and development,” said Sharad Yadav of the National Democratic Party.