Donald Trump calls for Florida election recount to be abandoned 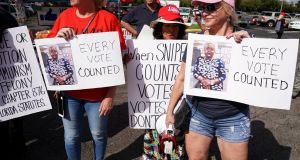 Protesters before a ballot recount in Lauderhill, Florida, US. Photograph: Reuters/Carlo Allegri

US president Donald Trump has called for the election recount in Florida to be abandoned and for Republican election candidates to be appointed, as he waded into an increasingly bitter voting recount controversy in the southern state.

In an early morning tweet, Mr Trump claimed that large numbers of votes in the state came “out of nowhere” while others were missing or forged. He said Republican Senate candidate Rick Scott and candidate for governor Ron DeSantis should be declared the winners.

“The Florida election should be called in favor of Rick Scott and Ron DeSantis in that large numbers of new ballots showed up out of nowhere, and many ballots are missing or forged,” he tweeted. “An honest vote count is no longer possible – ballots massively infected. Must go with election night!!”

Mr Trump’s call to halt the recount was made despite the fact that overseas voters, including members of the military, have until November 16th to return their votes to their states.

A recount was ordered in Florida on Saturday in three statewide races. Though the state has long had a patchy record when it comes to election counts, including in the 2000 presidential contest between George W Bush and Al Gore, this is the first time a full, statewide vote count has been ordered across Florida’s 67 counties.

Andrew Gillum, who hopes to become the first African-American governor in Florida, retracted his concession statement issued last Tuesday night. “I am replacing my words of concession with an uncompromising and unapologetic call that we count every single vote,” he said. “And I say this recognising that my fate in this may or may not change.”

Despite claims of “rampant fraud” in Broward and Palm Beach counties in southern Florida, Democrats insist that there is no evidence of fraud.

Mr Scott claims that in Broward County, supervisor of elections Brenda Snipes counted a certain number of ballots after the Saturday noon deadline. His Democratic opponent, Bill Nelson, said the lawsuits were “to stop every legal vote from being counted”. Mr Scott labelled his opponent a “sore loser” and accused him of “trying to steal an election”.

Elsewhere, other races remained in play, almost a week since the midterm elections. In Georgia, Democrat Stacey Abrams is refusing to concede to Republican Brian Kemp, who leads by about 60,000 votes. Along with the Georgia Democratic party, she lodged a lawsuit seeking to have absentee ballots that were rejected, included in the count.

Georgia’s newly-appointed secretary of state, Robyn Crittenden, has said counties must declare all election results by Tuesday evening, but the Abrams campaign is seeking to extend that deadline to Wednesday.

In Arizona, another open race, Democrat Kyrsten Sinema pulled ahead of Republican Martha McSally, as absentee votes continued to be counted in the state. Mr Trump also alleged that electoral corruption was happening in Arizona in a tweet on Friday. “Call for a new election?” he wrote on Twitter.