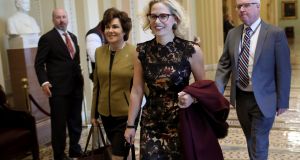 Democratic senators-elect Kyrsten Sinema and Jacky Rosen walk to the office of Senate minority leader Chuck Schumer for a meeting at the US Capitol on Tuesday. Photograph: Win McNamee/Getty Images

Just over a week after Americans went to the polls in the midterm elections, the incoming members of Congress arrived in Washington on Tuesday for “orientation”. Though the 116th Congress does not sit until January, the new members were summoned to the capital for a programme of briefings, tours and introductory sessions.

Much of the activity clustered around a downtown Marriott hotel, where the congressional class of 2019 are staying. Cameras were staked out and security was tight as Washington tried to catch a glimpse of the new faces that will make up Congress.

Some of those are already well-known – Alexandria Ocasio-Cortez, for example, the 29-year-old New Yorker who was certain to win her House of Representatives seat after she defeated Democratic incumbent Joe Crowley in a primary contest in June. But others are less familiar. All together, however, they represent one of the most diverse cohorts in congressional history.

Ayanna Pressley of Massachusetts and Jahana Hayes, who won a House seat in Connecticut, will become the first ever African-American women to represent New England in Congress.

Democratic National Committee chairman Tom Perez describes it as the most diverse group of candidates ever elected by Democrats. “Voters across the country sent a loud and clear message that our leaders should represent the diversity of our country,” he said.

Though the midterm elections in many ways presented a picture of a divided country as Republicans maintained their control of the Senate, it was a good night for the Democrats who will now control the 435-member House of Representatives for the first time in eight years.

Democrats picked up at least 35 Republican seats, a number that may rise as results continue to come in. The picture also looks brighter than expected in the Senate following the news on Monday night that Democrat Kyrsten Sinema defeated Republican Martha McSally in Arizona.

Senate hopeful Bill Nelson similarly has not given up the fight in Florida, where a recount is underway, while gubernatorial candidates Stacey Abrams and Andrew Gillum have not conceded as votes continue to be counted in their tight races in Georgia and Florida.

In particular, Democrats can take comfort going into the 2020 elections from a strong suburban vote.

President Donald Trump’s policies may continue to work well among rural and mostly older white voters – a group that was particularly important in this electoral cycle’s Senate map – but the results show that he is alienating many independent, middle-ground voters in urban and suburban America.

Republicans lost seats to Democrats in places as diverse as Oklahoma City, New York and Dallas. This should be worrying for the party, despite the fact that the electoral college system, and the Senate arithmetic which gives sparsely populated rural states such as North Dakota and Wyoming an outsized representation, benefits it. After all, Democrats again won the popular vote, but again this does not necessarily equate to political control.

The Democrats, however, can take comfort from the fact that their electoral strategy in the House races paid off.

In particular, the decision to focus on healthcare appeared to work. Across the country Democrats ran advertisements highlighting healthcare issues, in particular promising coverage for people with pre-existing conditions. Exit polls showed it was one of the main motivating factors for voters in these elections.

One defeated Congressman – Republican Jason Lewis, who lost his Minnesota seat in the House to a Democratic newcomer – blamed the late John McCain for the Democrats’ victory in the House, singling out his famous vote against the Republican effort to reform Obamacare in July last year (his comments were described as “abhorrent” by McCain’s daughter Meghan).

With Democrats poised to take control of the House in January, they will most likely seek to protect all the provisions of Obamacare

While the Affordable Care Act, also known as Obamacare, was deeply unpopular with the public initially and was seen as the reason behind the Democrats’ wipeout in the 2010 midterms, polls show that it has been gaining support.

In particular, Democrats focused during the campaign on the fact that 20 states, with the support of the Trump administration, are legally challenging key provisions of Obamacare including protection for people with pre-existing conditions. Over the last two years the administration has also been trying to dismantle provisions of Obamacare such as the requirement for employers to provide birth-control coverage for employees.

With Democrats poised to take control of the House in January, they will most likely seek to protect all the provisions of Obamacare, and to stabilise the healthcare marketplaces, which have seen the price of insurance for some people skyrocket, though the system now seems to be steadying. Trump also suggested that he would be prepared to work with Democrats on reducing prescription prices.

Ultimately, the results of the midterms are a vindication of House minority leader Nancy Pelosi’s disciplined and focused strategy – she urged Democrats not to be tempted to run on an anti-Trump message but to focus on healthcare. It seems to have paid off.

Despite a strong economy, some voters may have been more concerned about the bread-and-butter issue of healthcare costs than tax cuts. For Republicans, who have long staked their reputation on criticising Obamacare, it is a telling lesson ahead of 2020.