Ethiopia plants about 350 million trees in a single day 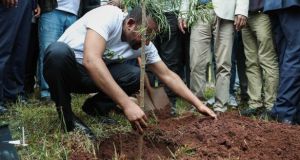 Public offices were reportedly been shut down in Ehtiopia to allow civil servants to take part in the tree planting. Photograph: Office of the prime minister of Ethiopia

About 350 million trees have been planted in a single day in Ethiopia, according to a government minister.

The planting is part of a national “green legacy” initiative to grow 4 billion trees in the country this summer by encouraging every citizen to plant at least 40 seedlings. Public offices have reportedly been shut down for civil servants to take part.

The project aims to tackle the effects of deforestation and climate change in the drought-prone country. According to the UN, Ethiopia’s forest coverage was just 4 per cent in the 2000s, down from 35 per cent a century earlier.

Ethiopia’s minister of innovation and technology, Dr Getahun Mekuria, tweeted estimates of the number of trees planted throughout the day. By early evening on Monday, he put the number at 353 million.

The previous world record for the most trees planted in one day stood at 50 million, held by India since 2016.

Dr Dan Ridley-Ellis, the head of the centre for wood science and technology at Edinburgh Napier University, said: “Trees not only help mitigate climate change by absorbing the carbon dioxide in the air, but they also have huge benefits in combating desertification and land degradation, particularly in arid countries. They also provide food, shelter, fuel, fodder, medicine, materials and protection of the water supply.

“This truly impressive feat is not just the simple planting of trees, but part of a huge and complicated challenge to take account of the short- and long-term needs of both the trees and the people. The forester’s mantra ‘the right tree in the right place’ increasingly needs to consider the effects of climate change, as well as the ecological, social, cultural and economic dimension.” – Guardian