In a series of tweets US President Donald Trump has demanded that Sweden "give A$AP Rocky his freedom". The musician has been charged with assault causing actual bodily harm in Stockholm. Video: Reuters 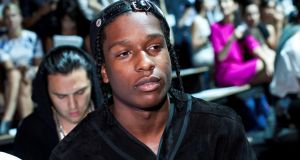 US rapper A$AP Rocky, who is to go on trial for assault in Sweden next week. Photograph: Andrew Burton/Reuters

Sweden on Friday dismissed an angry outburst from US president Donald Trump after prosecutors charged US rapper A$AP Rocky with assault, saying the country’s judicial system was independent of political interference.

A$AP Rocky is to go on trial for assault in Sweden on July 30th over his alleged involvement in a street brawl in Stockholm, the Swedish public prosecutor announced on Thursday, prompting an angry response from Mr Trump.

Best known for his song Praise the Lord, the 30-year-old performer, producer and model, whose real name is Rakim Mayers, was detained about three weeks ago following an altercation with two men on June 30th.

Mayers has said he is innocent and that the men provoked him and his two companions, who have also been charged with assault. If convicted, they could face up to two years in jail.

“We do so much for Sweden but it doesn’t seem to work the other way around. Sweden should focus on its real crime problem! #FreeRocky,” Mr Trump wrote.

The US president had said he would personally vouch for Mayers’s bail. Sweden does not have a bail system.

Mr Lofven has said he will not influence the rapper’s case.

Very disappointed in Prime Minister Stefan Löfven for being unable to act. Sweden has let our African American Community down in the United States. I watched the tapes of A$AP Rocky, and he was being followed and harassed by troublemakers. Treat Americans fairly! #FreeRocky

Give A$AP Rocky his FREEDOM. We do so much for Sweden but it doesn’t seem to work the other way around. Sweden should focus on its real crime problem! #FreeRocky

A spokesman for the Swedish government said on Friday the government would not get involved in the case.

“Sweden and prime minister Stefan Lofven have been very clear in the dialogue with both the White House and directly with the American president, that in Sweden everyone is equal before the law and that the government cannot interfere in legal proceedings,” the spokesman said in a text message.

Former prime minister Carl Bildt told the daily Aftonbladet that Mr Lofven was right not to comment further on the case. “I think it’s right of the government not to go into a mud wrestling match with Trump. That is his element, and should not be Sweden’s,” Mr Bildt said.

Mayers was in Stockholm to perform at the Smash hip-hop festival. His arrest forced him to cancel a dozen shows scheduled as part of his Europe tour.

More than half a million people, including fellow artists Nicki Minaj and Post Malone, have signed an online petition calling for Mayers’s release on bail.

Public prosecutor Daniel Suneson said he had begun criminal proceedings against Mayers and two others for suspected assault causing actual bodily harm, despite claims of self-defence and provocation.

“The artist is the one who threw the victim to the ground and then, together with two other suspects, dealt him blows and kicks. A bottle was used during the assault and there are cuts on the arms and [on] the plaintiff’s ear,” Mr Suneson said.

“Provocation is something that I, as prosecutor, must always take into account, but I still believe that what they have done constitutes a crime,” he added.

Mr Suneson declined to say which of the suspects had wielded the bottle in the fight. Court documents described the plaintiff as a person needing a Persian translator, but did not provide any further details.

Mayers’s lawyer said the rapper would plead not guilty at the trial when it begins on Tuesday. “Mayers is extremely marked by the time he has been detained. It is tough to be basically isolated,” lawyer Slobodan Jovicic said at a news conference.

“We have to be humble but I definitely think there are grounds for an acquittal,” he said.

Mr Suneson said he would seek a sentence of less than two years. He said he had looked at evidence including text messages and video footage that has not been made public.

Before his arrest, Mayers had uploaded videos on Instagram of the alleged altercation, saying the two men had followed his team and that he had not wanted any trouble.

Mayers shot to fame with his 2011 debut mixtape Live.Love.A$AP, gaining recognition as much for his experimental approach to music as for his unpredictable fashion style that made him the first person of colour to front luxury brand Dior Homme.

His latest album, Testing, reached the number four spot on the Billboard 200 charts on its release last year. – Reuters