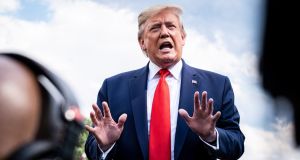 President Donald Trump on Friday threatened to impose reciprocal action on France in retaliation for its imposition of a digital tax on tech giants. Photograph: Pete Marovich/The New York Times

The US economy slowed in the second quarter, potentially undercutting one of President Donald Trump’s key electoral advantages going into next year’s election.

Second-quarter figures released on Friday showed that economic growth slowed to 2.1 per cent between April and June. This compares to GDP growth of 3.1 per cent in the first quarter. Though the figures topped most analysts’ expectations – experts had been expecting a slowdown based on other economic data – the figures indicate that the US economy is battling headwinds, including trade tensions with China. Responding to the figures, commerce secretary Wilbur Ross said the data proved the economy’s continuing strength.

Asked if there were signs that the US economy could be heading into recession next year, he said: “They are dying to have a recession. They can’t bear going into next year’s election with the economy the way that it is” – an apparent reference to Democrats.

Separately, the commerce department published revised figures on Friday that showed the US economy grew by 2.5 per cent in 2018 – lower than the 3 per cent target pushed by the Trump administration.

The latest economic data increased speculation that the Federal Reserve could take monetary action at its policy meeting next week. The Fed, and its chairman Jerome Powell, have been a constant target of attacks in recent months by Mr Trump, who has been calling for an interest rate cut.

Tweeting shortly after the new figures were announced, Mr Trump wrote: “Q2 GDP Up 2.1% Not bad considering we have the very heavy weight of the Federal Reserve anchor wrapped around our neck. Almost no inflation. USA is set to Zoom!”

Mr Trump also raised the prospect of a renewed trade war with the European Union, threatening to impose reciprocal action on France in retaliation for its imposition of a digital tax on tech giants. “France just put a digital tax on our great American technology companies. If anybody taxes them, it should be their home Country, the USA. We will announce a substantial reciprocal action on Macron’s foolishness shortly. I’ve always said America wine is better than French wine!”

The US president, who does not drink alcohol, owns several wineries which produce a range of Trump-branded wine.

The new set of economic figures were issued a day after the Trump administration unveiled details of its $16 billion bailout package for farmers – its second multibillion-dollar financial package for the agriculture sector, which has been adversely affected by the ongoing trade war with China. Under new provisions, the financial aid will go to smaller farmers, rather than big agricultural corporations amid reports that larger entities profited from the last round of payouts.

Republicans have been touting the US’s strong economic performance as they prepare to fight for a second term in the White House next year. The economy recently entered its longest period of protracted growth, beginning its 11th year of consecutive economic expansion.

But Friday’s figures suggest that this robust performance could be cooling. Nonetheless, analysts pointed out that the figures were expected, and highlighting strong consumer spending trends in particular.

“This pace might seem underwhelming when viewed in isolation, but it is a respectable performance for this stage of the business cycle,” Daiwa Capital Markets said in a note to clients.

Separately, as members of the House of Representatives broke for the summer recess, the House judiciary committee said it was asking a court to unseal grand jury secrets related to the Russia investigation. In the application, the committee argues that it needed access to the documents to decide whether to recommend articles of impeachment against Mr Trump.

It is one of the strongest signals yet that the House is considering beginning impeachment proceedings, despite resistance from some Democrats, including House speaker Nancy Pelosi.