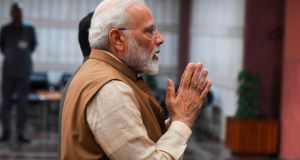 India’s opposition parties and political activists are fiercely opposing the passage of a controversial anti-terror Bill through the country’s parliament by the Hindu nationalist Bharatiya Janata Partry (BJP) government, claiming it infringes on human rights and is liable to abuse.

The Congress Party, which staged a walk-out in parliament last week when the Unlawful Activities (Prevention) Amendment (UAPA) Bill 2019 was being debated, warned that the proposed legislation was “draconian” and could turn India into a “police state”.

But federal home minister Amit Shah defended the Bill, claiming it complied with international standards and was “necessary” to keep India’s law enforcement agencies ahead of terrorists.

Under the UAPA Bill, any person can be designated a terrorist on seemingly broad and ambiguous grounds, such as causing damage to property, using criminal force against any public functionary, misguiding people through propaganda and even “preparing” for terrorism.

It authorises police to detain such suspects for 180 days in judicial custody, instead of the usual 60 to 90 days, without legal justification. It also permits the accused to be detained in police custody for 30 days instead of 15.

The UAPA Bill was cleared in the Lok Sabha, or parliament’s elected lower house, where the BJP swept to power with an overwhelming majority following general elections in May, with 288 MPs voting in favour and only eight opposing.

However, the legislation has to be cleared by the Rajya Sabha – parliament’s upper house – before becoming law. Opposition MPs said it could be defeated there as the BJP does not command a majority in the upper house and needs to solicit votes from smaller regional parties and independents.

The fiery MP from the Trinamool Congress Party in eastern Bengal state said in parliament that anyone who did not agree with the “homogenous idea of India that the BJP government was trying to thrust upon the country risked being branded anti-national”.

Asaduddin Owaisi, another opposition MP from the All India Council of the Union of Muslims, said the Bill violated the country’s constitution, particularly its federal status, and could be invoked by the Hindu nationalists against Muslims and low-caste Dalits.

Several amendments proposed by Mr Owaisi, a barrister, to mitigate the Bill’s tougher provisions were defeated in the house by the BJP’s majority, triggering further uproar in parliament.

Meanwhile, Amnesty International India termed as “false” the government’s assertion that the Bill complied with international standards and claimed that it “opened the floodgates to harassment of human rights defenders and activists”.

It also questioned the increased powers that the Bill confers upon the police.

“Torture and other ill-treatment [of suspects] in police custody are widespread in India, but are rarely punished,” Amnesty India’s policy adviser Mrinal Sharma said. He pointed out that India has yet ratify the UN Convention against Torture and other cruel, inhuman or degrading treatment.

Once approved, the UAPA Bill will be reinforced by earlier parliamentary legislation which bestows additional powers on the National Investigation Agency (NIA) – an organisation akin to the Federal Bureau of Investigation in the US, charged with investigating terror-related cases.

Cleared by the lower house, and the Rajya Sabha last Thursday, the Bill grants the NIA the authority to seize all assets belonging to alleged terrorists in addition to bestowing greater investigatory power on the agency’s relatively junior officers.