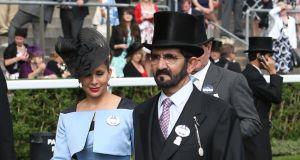 The estranged wife of the ruler of Dubai is applying for a forced marriage protection order, the UK high court has heard.

Princess Haya Bint Al Hussein arrived at the Royal Courts of Justice in London on Tuesday ahead of the latest hearing in the legal battle between her and Sheikh Mohammed bin Rashid Al Maktoum over their children.

Princess Haya and Sheikh Mohammed issued a statement confirming they are parties to proceedings before the court following a private hearing before the President of the Family Division, Sir Andrew McFarlane, earlier this month.

The statement said: “These proceedings are concerned with the welfare of the two children of their marriage and do not concern divorce or finances.”

During a preliminary hearing on Tuesday, the judge allowed the media to report that Princess Haya has applied for wardship of their children, as well as for a forced marriage protection order and a non-molestation order in relation to herself.

Rejecting an application by Sheikh Mohammed’s lawyers for those details to be subject to reporting restrictions, Sir Andrew ruled that “there is a public interest in the public understanding, in very broad terms, proceedings that are before the court”.

The court also heard that Sheikh Mohammed has applied to the High Court for the summary return of the children to Dubai.

Earlier, reporters who were not accredited in the UK or whose publications were based outside of England and Wales were prevented from attending the hearing.

Sheikh Mohammed, who turned 70 earlier this month, is the vice president and prime minister of the United Arab Emirates and ruler of Dubai.

He is also the founder of the successful Godolphin horse racing stable and last month received a trophy from the Queen after one of his horses won a race at Royal Ascot.

He was not present at the hearing on Tuesday.

Princess Haya (45) who is the half-sister of King Abdullah II of Jordan and is Sheikh Mohammed’s sixth wife, reportedly fled Dubai earlier this year. – PA