São Paulo Letter: President gains in popularity among the poor with social payments 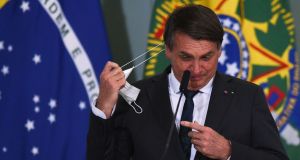 Jair Bolsonaro might have overseen one of the worst responses to the coronavirus pandemic anywhere but you would not necessarily know it today.

A few months ago, as the virus got a grip on Brazil, its far-right president looked in deep political trouble. As he denied the need to take action to contain the spread of the virus and campaigned against quarantine measures and even his own health minister, there were nightly pot-banging protests while impeachment motions piled up in congress.

The president was already engaged in efforts to neuter probes into his family’s corruption, and his mishandling of the health emergency left him sensing such a threat to his position that he openly flirted with mounting a coup against the supreme court and congress.

But now, despite more than 3.7 million Brazilians having caught Covid-19 and almost 120,000 deaths from it – the most anywhere after the United States – Bolsonaro is enjoying his highest poll ratings since entering office. A recent Datafolha survey showed the number of Brazilians who think he is doing a good or great job has gone from 32 to 37 per cent, and more importantly his disapproval rating has dropped from 44 to 34 per cent.

The data explains why. While middle-class support has ebbed away, the president has gained in popularity among the country’s poor, even in the northeast region, traditionally a bastion of the left-wing Workers’ Party. This is where the impact of his government’s emergency payments to help those affected by the downturn caused by the pandemic has been most felt.

The injection of cash into the economy of the equivalent of €7.5 billion a month is so large it has caused a dramatic drop in inequality despite the plunge in economic activity, according to a study by a team at the University of São Paulo. And Bolsonaro has won support among those getting the payments.

There is an irony in this as during Bolsonaro’s first year in office his administration undermined the much-lauded social assistance programme Bolsa Família (the family purse). And his economic team was reluctant to implement an emergency payment scheme at the start of the pandemic and was pressured by the left-wing opposition into raising its value to about €90 a month.

But now that the president has discovered the political dividend that can be had from cash transfer programmes he wants to repackage the Bolsa Família, which he previously denigrated as vote buying, expanding it to include those receiving the emergency payments.

But Brazil lacks the funds for such a policy. The emergency payments dwarf the budget for the Bolsa Família. Rather than make politically unpopular cuts elsewhere or hike taxes, Bolsonaro is flirting with abandoning one of the pillars of his election platform, fiscal responsibility. “What’s the problem?” he asked about breaking a constitutionally mandated cap on spending.

His finance minister Paulo Guedes, Bolsonaro’s guarantor with Brazil’s financial markets, warned this risked impeachment. But the president now has fewer worries on that front because he has already ditched another key platform that helped get him elected – the fight against corruption.

This became necessary because he had to get Brazil’s anti-graft bodies under his control fast as they were closing in on the criminal schemes operated by his family during the years it became rich from politics.

In April this cost him the backing of anti-corruption crusader Sergio Moro, who quit as his justice minister.

The pretence of caring about combating corruption now dropped, this allowed the president to ally himself with the worst practitioners of political graft in congress whose sworn enemy was former judge Moro.

This alliance has been sealed by the distribution of jobs and spending, a practice Bolsonaro said he would do away with.

With these new allies the president has a congressional base large enough to block any attempts at impeachment. And these wily political operators have long known what Bolsonaro has learned with the emergency payments – there are more votes to be won in Brazil with spending than fiscal rectitude, at least until the economy blows up.

And so Bolsonaro is enjoying his best moment in office. But gone is any dissembling that a man who heads a family that doubles up as a gang of political grifters cares about ending endemic corruption. And Guedes and lip-service to fiscal responsibility could be the next to go.

To survive, Bolsonaro is increasingly embracing his true populist self.