‘No one will be safe in Biden’s America,’ US president tells supporters in White House speech

A defiant Donald Trump has accepted the Republican nomination for a second term as US president with a scathing attack on rival Joe Biden. Video: Reuters 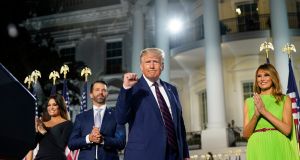 President Donald Trump is joined on stage by family members during the final night of the Republican National Convention. Photograph: New York Times 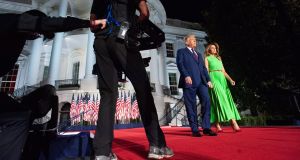 US president Donald Trump and first lady Melania Trump arrive on stage during the closing night of the Republican National Convention, on the South Lawn of the White House. Photograph: EPA 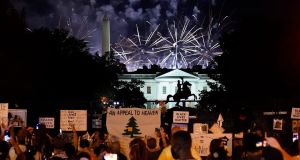 Fireworks light up the sky over Washington and the White House, after president Donald Trump delivered his acceptance speech at the White House. Photograph: AP 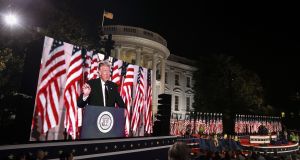 President Donald Trump is displayed on a screen while speaking during the Republican National Convention. Photograph: Bloomberg 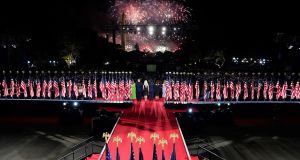 A fireworks display goes off behind the Washington Monument as president Donald Trump is joined on stage by his family during the final night of the Republican National Convention. Photograph: New York Times 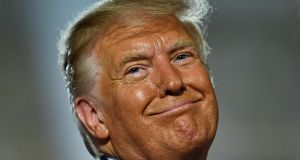 US President Donald Trump looks on after delivering his acceptance speech for the Republican Party nomination for reelection during the final day of the Republican National Convention. Photograph: Getty

US president Donald Trump launched a pointed attack on his Democratic rival Joe Biden on the final night of the Republican convention, as he formally accepted his party’s nomination for president.

In a lengthy speech delivered at the White House, Mr Trump described November’s presidential election as “the most important ... in the history of our country”.

“At no point before have voters faced a clearer choice between two visions, two philosophies or two agendas – whether we save the American dream or whether we allow a socialist agenda to demolish our cherished destiny,” he said.

“Joe Biden is weak. He takes his marching orders from liberal critics,” he declared to the assembled crowd of approximately 1,500 invited guests.

Amid heightened tensions in the United States over race relations following the police shooting of 29-year-old black man Jacob Blake last weekend in Wisconsin, Mr Trump also outlined his support for law enforcement personnel, casting Republicans as the party of law and order.

“If you give power to Joe Biden, the radical left will defund police departments,” he warned. “No one will be safe in Biden’s America. My administration will always stand with the men and women of law enforcement.”

“If the Democrat Party wants to stand with anarchists, agitators, rioters, looters, and flag-burners, that is up to them, but I, as your president, will not be a part of it.”

In an unprecedented development, the South Lawn of the White House was transformed into the site for a national political convention – a move that was widely criticised by Democrats who accused Mr Trump of improperly using the White House as a backdrop for a partisan event.

The event concluded with a lavish fireworks display, with the phrase “TRUMP 2020” sketched in the sky over Washington in red, white and blue.

Mr Trump was introduced by his daughter and adviser, Ivanka, who described her father as “the people’s president”.

“Whether you agree with him or not, you always knows where he stands,” she said. “His tweets can seem a bit unfiltered, but the results speak for themselves.”

Rudy Giuliani, Mr Trump’s personal lawyer, spoke about crime in New York City as he highlighted his time as mayor. “How did we get overwhelmed by crime?” he asked. “Don’t let Democrats do to America what they have done to New York.”

Describing Joe Biden as “obviously a defective candidate”, he said Mr Biden was a trojan horse for Democrats like Nancy Pelosi and Bernie Sanders, and their “pro-criminal, anti-police, socialist policies”.

“These continuous riots in Democratic cities gives you a good view of the future under Biden,” he said, in reference to the recent Black Lives Matter protests across the country.

“This awesome job of restoring safety for your people can be done from your basement, Joe,” he said, addressing the former vice president directly. Republicans have accused Mr Biden of “hiding” in the basement of his home rather than actively campaigning.

In an emotional appearance Ann Dorn, the widow of David Dorn, a retired African-American police officer who was killed while a store was looted during the George Floyd protests in St Louis in June, described how her husband was shot and killed and the scene livestreamed on the internet.

“Democratic politicians have surrendered our streets and our institutions ... in city after city, they have slashed police budgets ... passed laws that have made it impossible for police officers to do their job effectively,” he said.

Ahead of an appearance by Jeff Van Drew, a New Jersey congressman who defecte to the Republicans from the Democrats, the evening heard from a range of former Democratic voters who say they are now supporting Mr Trump.