Former US first lady Michelle Obama has urged Americans to vote for Joe Biden like their “lives depend on it,” as she delivered the keynote address on the first night of the Democratic National Convention. Video: Reuters 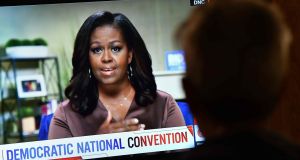 Michelle Obama gently buried her husband’s former worldview this week while delivering other “cold hard truths” to America. “We live in a deeply divided nation,” she told the Democratic convention on its first night. “If you think things cannot possibly get worse, trust me, they can.”

Barack Obama, of course, launched his national career on the opposite premise at another convention half a generation ago. “There’s not a liberal America and a conservative America,” Obama said in 2004. “There’s the United States of America.”

Those words sound very innocent today. This year’s conventions seem to be happening in another country, as well as in separate nations. The virtual Democratic gathering depicts a rainbow America that will root out historic injustices.

It is black, white, brown, gay, transgender, differently abled and consciously urban. The Republican one, which starts on Monday, will look overwhelmingly white, suburban, small town and almost exclusively straight. It promises to restore historic conditions to a time before political correctness.

Some have compared US politics today to the atmosphere in 1860 before the civil war. This year’s conventions are only stoking such fears. They offer visual breakdowns of hostile camps that neither resemble each other nor consider the other benign.

It was still possible when Mr Obama was rising to joke about US elections as a choice between “Pepsi and Coke”. Mutual contempt had not yet swamped partisan rivalry. Today’s allegations of looming fascism from one side, and Godless anti-Americanism from the other, are the kinds of epithet soldiers exchange as they prime their rifles. It is the vocabulary of zero sum struggle.

Next week’s Republican convention will be a marathon troll of liberal America. Among the speakers are Mark and Patricia McCloskey, a Missouri-based couple who shot to notoriety this summer when they came out of their home pointing a semi-automatic rifle and handgun at Black Lives Matter protesters. Donald Trump has said that Joe Biden wants to “confiscate the guns of law-abiding Americans” and “protect criminals”.

Andrew Pollack, the father of a girl who was killed in last year’s Parkland school massacre, will also speak. He claims his daughter would be alive today if her teachers had been allowed to carry guns. Others include the widow of a slain police officer, an anti-abortion activist and a teenage student falsely vilified for having started a shouting match with a native American activist (it was the other way round).

Trump’s line-up of speakers is not intended to persuade. Their role is to provoke. Liberals will surely rise to the bait. He has not yet found a slogan to replace his “Make America Great Again” line from 2016. The phrase “Keep America Great” was quietly dropped after the pandemic took hold.

But his tone is a million miles from Ronald Reagan’s “Morning in America” - the penultimate time a Republican president was re-elected. It is also far removed from George W Bush’s “A safer world and a more hopeful America” in 2004 – the last time an incumbent Republican was returned to office.

This is how Trump describes what is at stake in 2020: “We are in a fight for the survival of our nation and civilisation itself.” That is exactly how Democrats feel about the prospect of another Trump term. It is not the kind of election that is likely to wrap up after polling day.

So is Mrs Obama right to say things can get much worse? Alas, she is far closer to the truth today than her husband used to be. Obama talked of a world where Americans could disagree without being disagreeable, where what united them was far greater than what divided them. Trump has caused him to change his mind.

Biden talks as if such a world still exists – in contrast to most others in his party, now including both Obamas. He reminisces about a world where Americans would meet in the middle. The evidence is against him. Trump says Biden is “against God” and would “hurt the bible”. Such differences cannot be split. It is all or nothing in 2020. – Copyright The Financial Times Limited 2020