Alexei Navalny gets go-ahead to be evacuated to Germany 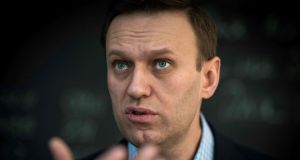 Alexei Navalny is set to be airlifted to Germany for specialist medical treatment as Russia’s most prominent critic of the Kremlin remains in a coma after a suspected poisoning.

The decision to allow for his evacuation after repeated denials came at the end of a day of intense lobbying by his family and supporters. They argued that remaining in a Siberian hospital was a threat to his life and was being ordered by Russian authorities who did not want the substance that had caused his illness to be discovered.

President Vladimir Putin’s best-known critic ending up in hospital after drinking a cup of tea at an airport has underscored the threats against opposition activists in Russia. It has sparked demands by global leaders for a full investigation, following contradictory statements from the doctors treating him.

Anatoly Kalinichenko, deputy chief doctor at the hospital in Omsk in southern Siberia where Mr Navalny has been in intensive care since Thursday, told reporters that they had found no traces of toxic substances in his system, and that he was “demonstrating a positive trajectory” and was “quite stable”.

“The diagnosis of poisoning will remain at the back of our minds. But we don’t believe the patient was poisoned,” Mr Kalinichenko said.

But earlier on Friday, Ivan Zhdanov, head of Mr Navalny’s Anti-Corruption Foundation, said a police officer had told him Mr Navalny was poisoned with a substance “that poses a threat not only to him but to those around him” and that those treating the activist were required to wear protective equipment.

Approval for Mr Navalny to fly to a Berlin hospital on a plane provided by private donors was granted late on Friday, after Mr Navalny’s wife Yulia made a public appeal to Mr Putin. The European Court of Human Rights said it was considering a special plea to permit the journey.

Mr Navalny (44) had been in western Siberia meeting opposition candidates for local elections next month and filming video for one of his viral anti-corruption investigations on YouTube.

He fell ill on a flight from Tomsk to Moscow on Thursday and collapsed in the plane’s bathroom, where he groaned in pain before passing out and falling into a coma. The plane made an emergency landing in Omsk.

As doctors continued to reject appeals for him to be granted permission to take the flight to Germany on Friday, Mr Navalny’s family said they feared the delay could harm his health or be part of a cover-up to make it impossible to determine what substance caused him to lose consciousness.

“We think they are doing it so that the chemical substance in Alexei’s body disappears and there isn’t a trace left - that’s why they won’t hand him over. He’s not in a good condition and we obviously can’t trust this hospital,” said Ms Navalnya.

German doctors who arrived on the plane were allowed to see Mr Navalny and told Kira Yarmysh, Mr Navalny’s spokeswoman, that they believed he was in a stable condition and could safely handle the flight.

Dmitry Peskov, Mr Putin’s spokesman, earlier on Friday denied that the Kremlin was aware of any impediment to transporting Mr Navalny, except that it was “exclusively a medical decision”.

Police prevented Mr Navalny’s team from speaking to the German doctors when they visited the hospital, after which the Siberian doctors claimed they had mutually agreed Mr Navalny was not fit to travel.

The apparent poisoning would be the sixth such attack on Russian opposition activists in the past five years. Police refused to investigate all of the incidents, while doctors were unable to determine what was allegedly used to poison the activists.

The EU expects “a swift, independent and transparent investigation” and that if poisoning was confirmed, “those responsible must be held to account”, bloc spokeswoman Nabila Massrali said in a statement.

Mr Navalny’s exposés of official corruption on YouTube have earned him a wide following and a string of powerful enemies among Russia’s officials and oligarchs.

As the price of his activism, Mr Navalny has been jailed 13 times for protesting against Mr Putin, sentenced to a lengthy prison sentence that judges abruptly commuted the next day after it sparked a rally outside the Kremlin, and harassed around the clock by trolls allegedly working for St Petersburg businessman Evgeny Prigozhin.

In 2014, his younger brother Oleg was jailed for three years in a case Mr Navalny described as “hostage-taking” in retaliation for his activism.

Last year Mr Navalny claimed he was poisoned with an unknown substance that provoked a severe allergic reaction while serving one of his many short jail sentences for protesting against Mr Putin. In 2017, a pro-Kremlin activist attacked Mr Navalny with a chemical that left him partially blind in one eye.

The EU and UK expressed concern over Mr Navalny’s health on Thursday, while French president Emmanuel Macron said France and Germany would offer “all necessary assistance to Navalny, in terms of healthcare, asylum and protection”.

Joe Biden, the democratic nominee in November’s US presidential election, said on Twitter: “[Russian] opposition leader Alexei Navalny is in a coma after being poisoned. It’s unacceptable”, adding that in office he would “stand up to autocrats like Putin”. – Copyright The Financial Times Limited 2020