First deaths reported as Storm Florence makes landfall in US 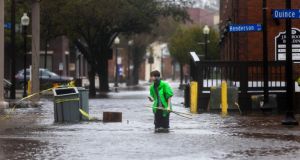 North Carolina governor, Roy Cooper: ‘To those in the storm’s path, if you can hear me, please stay sheltered in place’ Photograph: EPA/Jim Lo Scalzo

Thousands of people were without power and hundreds had to be rescued on Friday as Hurricane Florence made landfall on the east coast of the United States. Four deaths have been reported so far, including a mother and her infant child who were killed when a tree fell on their car.

On Friday evening, the hurricane was downgraded to a tropical storm, as it continued to cause major damage.

The huge storm, which has been barrelling towards the east coast for days, officially made landfall shortly after 7am near Wrightsville Beach in North Carolina with gusts of 144 km/h recorded.

It then remained virtually at a standstill for hours before moving slowly inland at about 4.8km/h, pummelling North and South Carolina throughout the day.

The storm began to weaken as it brought catastrophic rain and winds to the region, but winds of 128km/h continued to wreak havoc in coastal areas.

The hurricane, which is more than 600km wide, is expected to bring further devastation in the coming days. In particular, authorities are concerned about rainfall and storm surges.

Some models predicted that up to 127cm of rain could fall in North Carolina by Sunday.

Incredible job being done by FEMA, First Responders, Law Enforcement and all. Thank you!

About 200 people were saved overnight on Thursday, while hundreds more were forced to seek help on Friday. Hundreds were rescued from New Bern, a small city near the North Carolina coast which was inundated by the storm.  “New Bern has not seen a storm like this since the ’50s,” the city’s mayor Dana Outlaw said. “I think people just assume things like this just won’t happen.”

Wilmington, a city in southeastern North Carolina, was hit by the strongest winds in half a century, according to the National Weather Service. Wind gusts of 105 miles per hour were recorded on Friday morning.

“Hurricane Florence is powerful, slow and relentless,” he said at a news briefing on Friday. “It’s an uninvited brute who doesn’t want to leave.” He warned that the storm would “continue its violent grind across the state for days. To those in the storm’s path, if you can hear me, please stay sheltered in place.”

Almost half a million people were without power on Friday, while an estimated 20,000 people had sought refuge in dozens of shelters across North Carolina.

The storm is expected to move southwest farther into South Carolina before moving north in the coming days.

While North and South Carolina found themselves right in the storm’s trajectory, other areas farther north were spared.

Neighbouring Virginia lifted its mandatory evacuation order. “The imminent threat of coastal flooding and high winds have passed for our coastal communities as Hurricane Florence has made landfall in the Carolinas and we believe it is safe for Virginians to begin returning home,” Mr Northam said in a statement. “We are shifting our focus to the expected inland flooding and damage to southwest Virginia as Florence turns north this weekend.”

More than 2,000 flights have been cancelled as a result of the storm, with several airports in the area closed. Schools and universities in the region have been closed as activity in the Carolinas has ground to a standstill.

US president Donald Trump, who spent the day at the White House, tweeted about the storm’s progress throughout the day, noting that more than 7,000 defence personnel were on standby to assist.

“Incredible job being done by FEMA, First Responders, Law Enforcement and all. Thank you!” he said, referring to the Federal Emergency Management Agency.

The president was widely criticised on Thursday for disputing the official death toll from Hurricane Maria in Puerto Rico last year and falsely accusing Democrats of inflating the figures to “make me look as bad as possible”.