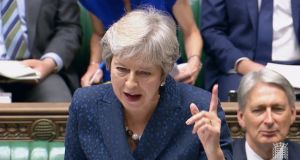 The UK’s opposition Labour party is set to vote against British prime minister Theresa May’s Brexit deal, according to one of Jeremy Corbyn’s most senior colleagues, who predicts that the lack of a viable exit from the EU would lead to the prime minister being forced from office before Christmas.

Emily Thornberry, shadow foreign secretary, told the Financial Times a workable deal was “just not going to happen” under Mrs May.

She said there would need to be a general election within months given the likelihood that the prime minister would be defeated on the crucial vote on any Brexit deal.

Labour’s opposition to the deal means that it would require as few as 10 Tory MPs - from either the party’s hardline Eurosceptic or pro-EU wings - to defeat the government.

Some Labour Brexiters could still swing behind Mrs May but few would want to avoid a chance to bring down the government.

Already 25 Conservative MPs have pledged to defeat Mrs May’s Chequers blueprint for the UK’s relations with the EU post-Brexit, while several Europhile Conservatives have backed a second Brexit referendum.

Many MPs argue that the prime minister could not survive a defeat on her Brexit deal, which has become the centrepiece of her two years in office.

“It all depends on what Labour does,” said one minister. “If they are going to vote against us then that means she really is in trouble.”

Labour has set six tests for supporting any Brexit deal, including that it delivers the “exact same benefits” as the UK’s current membership of the single market and customs union.

Ms Thornberry, a close ally of Mr Corbyn, Labour’s leader, said she could not visualise any likely circumstances where this would be achieved.

Labour’s official policy is to consider “all options”, including a second referendum on Brexit, if parliament rejects the government’s Brexit deal.

However, in a blow to pro-EU campaigners, Ms Thornberry made clear that she wanted a general election, rather than another referendum. “If there was a vote tomorrow, I would vote to remain in the European Union . . .But above all, I’m a democrat,” she said.

If Labour won a general election, it would still commit to taking Britain out of the EU, albeit after seeking to extend negotiations with the EU beyond the current March 2019 deadline, she stressed.

Downing Street is confident eurosceptic MPs. including Jacob Rees-Mogg, will ultimately decide not to vote against the Brexit deal in parliament, because of the risk that Britain would end up staying in the EU.

Ms Thornberry said the Chequers deal was already vague - “this is all to do with unicorns” - even before it was watered down after a rebellion by Tory MPs soon after its publication. “I don’t think this kind of half-in, half-out of the customs union will work. I think it’s just full of red tape and it’s going to cost us too much money. It’s just nonsense,” she said.

“Even if they come back in October, November, and they say, ‘this flimsy bit of paper is what you’re going to have to agree to, otherwise there’ll be no deal’. We’re not going to agree to either of those.”

Labour’s six tests include a comprehensive trade agreement as well as continued co-operation on science, security, research and technology. The party argues that it is reasonable to demand a deal that provides the “exact same benefits” from Europe as EU membership - given that the phrase was first used by David Davis, former Brexit secretary. - Financial Times